Just two days after the worst kept secret in live poker was announced at Wembley Stadium, only 138 players competed in the ISPT online Day 1b on MyPok.fr. 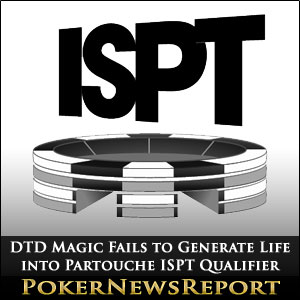 Just two days after the worst kept secret in live poker was announced at Wembley Stadium, only 138 players competed in the ISPT online Day 1b on MyPok.fr.

Last Friday it was officially confirmed that Dusk till Dawn, APAT and the Hendon Mob were throwing their support behind the International Stadiums Poker Tour at Wembley in June and guaranteeing that the winner of the ISPT Main Event would walk away with no less than €1 million.

Dusk till Dawn et al may have dragged some credibility into the International Stadiums Poker Tour, but they still have to convince the international poker playing public that participating in the event is going to be worthwhile when scheduled up against the World Series of Poker and with further changes still planned for the event.

138 players in Partouche/MyPok´s Day 1B may appear to be a result in relation to the previously cancelled Day 1As on Lock Poker, NetBet and Poker770, but several factors bumped up the numbers before taking into account any “rewards” Partouche may have given to family members and friends.

First of all there were the ridiculously under-subscribed Super Satellites that were hosted on MyPok.fr at the weekend. Sunday´s €2.00 re-buy tournament – which guaranteed two seats into the Day 1B tournament – attracted just 34 players and raised €144.00 towards the €600.00 value of the prizes after the re-buys and add-ons were taken into account.

Secondly there are a considerable number of players who won live satellites into the Wembley Main Event before the online Day 1s were announced and when the format was €600.00 entry, re-buy and add-on. These players had their prizes converted into 6 x €300 entries in online Day 1As on MyPok.fr, so they had to qualify all over again – but are effectively playing the Day 1s on Partouche/MyPok.fr for free.

We Have Our First ISPT Winner!

Because the previous Partouche live satellite winners were given six entries into the online ISPT Day 1s (above), the question was asked whether a player qualifying for Day 2 in one of the earlier “qualifiers” would then receive a refund for the remaining online Day 1 tournaments they were entitled to enter.

The answer from ISPT Towers was that players qualifying multiple times on Partouche/MyPok.fr could play their largest qualifying stacks on Day 2 at Wembley and receive €3,000 for each of their other successful online Day 1 attempts.

Therefore, congratulations are in order to “Pascal6874”, who already had 85,999 chips from the first Day 1 online ISPT qualifier and who qualified again for Day 2 last night. Pascal is the first player to lock up a prize in the International Stadiums Poker Tour and is now on a €12,000 freeroll along with other Day 1A qualifiers “gumbojet” and “touille77r” who also have multiple entries booked in for the remainder of the online Day 1 ISPT qualifiers.

Going Back to that €1 Million Guarantee

Over the weekend, clearer details have emerged about what is guaranteed and what is not. Dusk till Dawn have guaranteed that the winner of the International Stadiums Poker Tour Main Event will collect a minimum of €1 million which they will be responsible for paying.

As the payment structure of the event is likely to allocate 20% of the prize pool to the winner, this means that if the total value of entries is €2 million, the first prize (allocated from the prize fund) would be €400,000 and Dusk till Dawn would be liable for the other €600,000.

None of the other prizes are guaranteed, and changes to the payout structure to be announced this week are likely to see the proportion of players cashing in the event once they get to Wembley reduced from 70% (as promised by the ISPT) to 50%.

As usual, the ISPT failed to deliver anything that was not already known in the sparsely attended press conference and even Dusk till Dawn had nothing to add to the leaked announcement that appeared on poker-actu.fr two weeks ago.

Dusk till Dawn have hinted that online Day 1s will now be played on their iPoker affiliated web site, but whether the participation of Lock Poker, NetBet and Poker 770 will be ongoing is open to speculation. Further details are to follow in the next few days.

Further details are also expected soon on ISPT2. Prior to the Wembley press conference, Prosper Masquelier was interviewed by German poker site pokerfirma.com and announced that talks were being held for an event to be staged at the 02 Arena in Prague. Will DTD be willing to bail him out next time? We shall see.