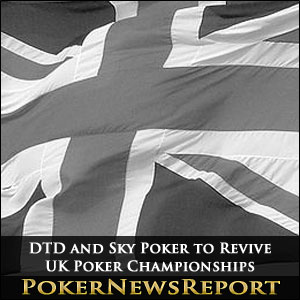 The old UK Poker Championships are going to be revived next February at Dusk till Dawn, with six championship bracelets and a Las Vegas package up for grabs.

The UK Poker Championships used to be the major non-US poker event of the year, back in the days before Internet poker was even a possibility. Formerly played at the Rainbow Casino in Birmingham (allegedly the first casino in the UK to offer Texas Hold´em in tournament format), the event used to attract all the best poker players from around the UK, including the irrepressible Dave Ulliott.

Sadly the Rainbow Casino was purchased by new owners and now no longer offers poker as an option to members. However, the UK Poker Championships are to be revived at the Dusk till Dawn poker club in Nottingham from 17th to 23rd February next year in a partnership between DTD and Sky Poker which will see the event televised on Sky Sports.

Six Championship Bracelets and a Trip to Las Vegas

The UK Poker Championships will feature six championship events for which the winners will each receive specially engraved Championship bracelets. The feature event is the £1,000 + £100 buy-in NL Hold´em Main Event which has a guaranteed prize pool of £500,000, and there will also be a Championship High Roller (buy-in £3,000 + £150), Heads-Up, Pot Limit Omaha, 6-Max and NL Turbo event.

In addition to the prize money and the jewellery on offer, Dusk till Dawn and Sky Poker will be running a leaderboard throughout the week – the winner of which will receive a $15,000 package to go and play poker in Las Vegas.

Writing on his blog, Dusk till Dawn´s owner Rob Yong said that the hosting of the UK Poker Championships was the last item on a bucket list he compiled for the club in 2007. The list included hosting the largest UK tournament field (achieved in the 2009 DTD Gran Prix), a £1million guaranteed tournament (achieved in the 2012 Nottingham UKIPT), a tournament which guaranteed £1million to the winner (the expensive ISPT 2013), a Caribbean event (DTD St Kitts 2012) and a UK Poker Championships Event.

[The UK Poker Championships] will be the biggest live event we have ever had and comes hot on the heels of another successful season of the Sky Poker Tour, which culminated in our Grand Final, also at DTD. We’re delighted to be working with Rob and his great team at DTD on this event – we’ve had many excellent events there in the past and this will be even bigger and better!

Online satellites for all the UK Poker Championships events will be announced soon.