Leg 10 of the Grosvenor UK Poker Tour was played this weekend in Luton, with Driton Haxhiaj taking the Main Event and denying the tour its first female winner. 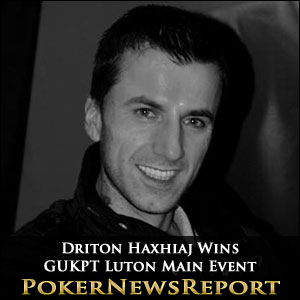 Leg 10 of the Grosvenor UK Poker Tour was played this weekend in Luton, with Driton Haxhiaj taking the Main Event and denying the tour its first female winner.

The Luton leg of the GUKPT was a memorable event for so many reasons – not least because the tour almost witnessed its first female winner, but also because of Driton Haxhiaj´s miracle run during the early stages of the final day which saw him make some incredible calls on his way to victory.

Haxhiaj had almost been overlooked in the run up to the final day´s action, despite being second in chips. All eyes were on Sin Melin, who held a massive chip lead when the twelve remaining players took their seats at the G Casino in Luton on Sunday, courtesy of rivering Quad Aces to eliminate Tim Timotheou in one of the biggest pots on Saturday night.

The final day of the GUKPT Luton Main Event started off at a frenetic pace. Caicai Huang doubled up against Sin Melin Q♠ 10♠ > A♣ K♠ when rivering the Q♦ to make top pair and then Melin doubled-up Joe Laming 2♠ 2♣ > A♣ 10♣ after Melin had hit trip Aces, but Laming had filled up into a Full House (Deuces over Aces).

Haxhiaj extended his lead still further as the official final table of nine got underway by flopping a set of Nines to take 150,000 chips off of Iqbal Ahmed; but Ahmed recovered after doubling up against Sin Melin 8♦ 6♦ (for trip Sixes) > A♣ K♠ (flopped a pair of Aces) to himself get through the million chip barrier and reduce the former chip leader to 420,000 chips.

A further level of play passed before the next player was to leave the tournament. Mitch Johnson was extremely unlucky to be the victim of another incredible hand – having moved all-in for his last 250,000 chips with K♠ 10♥ and receiving a call from Iqbal Ahmed (A♠ Q♣). The Flop and Turn of 4♣ 7♠ J♥ / K♣ left Johnson looking good for a double up with his paired King, but the 10♠ on the River gave Ahmed a Broadway straight and bust Johnson from the GUKPT Main Event in ninth.

As the game moved into Level 22 (blinds 10,000/20,000 – ante 2,000) Iqbal Ahmed moved into the chip lead when eliminating Danny Toffell in eighth A♣ 8♠ > K♠ 10♥´ç, and between them Ahmed and Haxhiaj had 3.2 million of the 5.3 million chips in play with seven players still remaining. However, that was soon to change with the remarkable run of Caicai Huang.

A Tale of Two Ladies

If there was to be a first ever female winner if a GUKPT Main Event, most observers at the start of the day would have believed it was more likely to be Full Tilt Poker ambassador Sin Melin who would take the title rather than the relatively short-stacked Caicai Huang. However, Melin was bust in seventh place when Ahmed Iqbal (8♦ 10♠) found four Spades on the board to best Sin´s trip Queens, while Huang doubled up three times within Level 23.

Huang’s trio of triumphs came against Ahmed Iqbal (Q♠ J♠ > 8♥ 5♥) and Driton Haxhiaj (Q♠ Q♥ > 9♣ 10♣) to decrease their authority at the table and, after taking a knock herself from Dean Clay, doubled-up again A♥ K♥ > A♣ Q♦ against Carlo Citrone. Joe Laming left the table in sixth when Driton Haxhiaj rivered a straight (K♦ 6♦ > K♥ Q♥}) before Huang delivered the knockout blow to Carlo Citrone 8♦ 8♠ > A♠ K♥ to reduce the table to just four players.

Caicai Huang got in on the act when rivering a spade to complete her flush against Haxhiaj´s two pairs (K♠ 3♠ > J♥ 5♣), but Haxhiaj gained his revenge to double back up against Huang (A♥ 3♦ > Q♠ 10♦) before doubling-up once more against Iqbal Ahmed A♦ 9♠ > K♦ J♦. Incredibly Driton Haxhiaj came from last to first when flopping a Full House Aces over Queens to cripple Iqbal Ahmed and Caicai Huang joined Haxhiaj in the heads-up when busting Ahmed in third A♦ 2♠ > K♣ Q♥.

Driton Haxhiaj had taken a significant 3.6 million -v- 1.6 million chip advantage into the heads-up against Caicai Huang, but Huang was playing the more aggressive poker and, as the game entered Level 27 (blinds 30,000/60,000), a second deal was agreed which would see the two players split the remaining £15,500 prize money and just play for the title.

The deal spurred the conclusion to the GUKPT Luton Main Event, as Caicai Huang (A♣ 6♥) moved all-in on the flop of 7♣ 8♥ 5♠. Haxhiaj (6♣ 4♠) snap-called, and the 6♠ on the Turn and Q♠ on the River failed to improve Huang´s hand past Haxhiaj´s flopped straight, giving the young local player the title of GUKPT champion and leaving the tour still waiting for its first female victor.

262 players either qualified online or paid the £1,000 buy-in for the GUKPT Luton Main Event. The top twenty-five players cashed in the tournament, with those who made it to the final day receiving the following:-