Alexandre Dreyfus – Director of the Global Poker Index – has hit back at claims that the GPI Index is “bogus” because it fails to account for player´s losses. 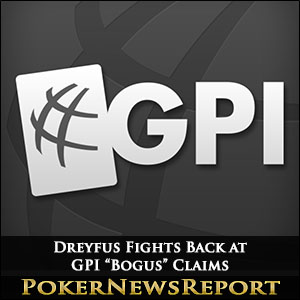 Alexandre Dreyfus – Director of the Global Poker Index – has hit back at claims that the GPI Index is “bogus” because it fails to account for player´s losses.

Earlier this week, PartyPoker´s Mike Sexton claimed that the rankings on the Global Poker Index were flawed because they failed to take into account entry fees, re-buys or staking by other players. Sexton said that because the poker industry only recorded what a player cashes out, there is no way of accurately determining how genuinely successful they are – especially when those players at the top of the GPI-300 predominantly compete in high roller events which favour players for whom money is no object.

Sexton acknowledged that there will always be a demand for super high rollers with unlimited re-buys because that is what some players want; and, in order to attract the biggest spenders in the poker industry, that is what promoters will provide. He failed to voice an opinion over whether super high roller re-buy tournaments were good or bad for the game, but commented that they are here to stay, so detractors should get over it.

Sexton Has a Good Point

In relation to Mike Sexton´s comments about the GPI being flawed (he actually wrote that the all-time money winner list has always been bogus), he has a good point. In his article, Sexton commented on Daniel Negreanu´s performance in the recent Aussie Millions $100K Challenge, in which Negreanu finished in sixth place for A$550,000 after buying-in five times for a net profit of just A$50,000.

However Negreanu also fired three bullets in the Aussie Millions $250K Challenge before finishing in fourth place for A$1.25 million (20% of which he had sold to another player), and it was well chronicled that he was considerably out of pocket following the PokerStars Caribbean Adventure during which he entered the $100K Super High Rollers three times without finishing in the money.

Max Silver is a Better Poker Player than Daniel Negreanu

Once you deduct the money Negreanu has paid in air fares, hotel accommodation and haircuts – and his tax liability to the IRS – it is very likely that Daniel Negreanu has made very little money from playing poker so far this year. Hopefully he got plenty of FPP Points on PokerStars for his multiple buy-ins! We don’t know how much Max Silver spends on haircuts, but guess it is far less than Daniel Negreanu.

PartyPoker gave Alexandre Dreyfus the opportunity to respond to Mike Sexton´s comments, and published an eloquently written response from the GPI owner. In his response, Dreyfus acknowledged that the all-time money list does not include buy-ins, re-entries or how much a player has sold of him/herself, but argued that the GPI Index is performance-based and has systems in place to prevent players for whom money is no object from claiming all the accolades.

Dreyfus pointed out that points are only awarded in the GPI-300 when a minimum of twenty-one players take part in an event (which would have excluded all the Aussie Millions $250K Challenges in previous years) and that the buy-in factor is capped at $20,000; so players who cash in higher value events will only receive the same number of points as if they were playing in a tournament with a much lower buy-in.

Dreyfus concluded his response by saying:

I see tournament poker as more of a sport, or at least a skill game/competition, and believe that the Global Poker Index and its scoring system places poker closer to the sports/competition world than looking at All-Time leader boards ever will.