Dragan Finishes Day 1A of EPT Barcelona with Chip Lead 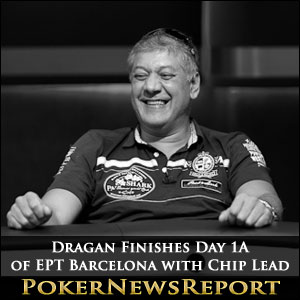 The first Day 1 of the EPT Barcelona Main Event saw 518 hopefuls – who had qualified online or ponied up the €5,300 buy-in to play in the tournament – enter the Hotel Arts annexe of the Casino Barcelona; and, after eight levels of play, Dragan Kostic – who came second in this tournament in 2011 – heads the leaderboard.

No Spaniard is yet to win an EPT Main Event, but Kostic (who was originally Serbian, but now lives in Mallorca) laid his cards firmly on the table, and was the second player to crash through the 100,000 chip barrier after compatriot Daniel Gomez. However, Kostic enjoyed a sensational final level of the day to bag and tag a stack of 215,000 chips at the close of play.

Possibly due to the chaos that led to exceptionally long queues on Day 1 of the Estrellas Main Event, many of the Team PokerStars players entered the EPT Barcelona Main Event on the first of the two Day 1s. Notable faces who survived the day included Jonathan Duhamel, Vanessa Selbst and Jason Mercier, while last year´s winner Mikalai Pobol and the first ever EPT Barcelona winner Alexander Stevic both finished the day with healthy chip stacks.

One player who will not be returning on Tuesday for Day 2 of the EPT Barcelona Main Event is up-and-coming Spanish player Sergio Aido. Aido has been on a fantastic roll recently – adding the UKIPT Galway High Roller and the UKIPT London Main Event to his victory in the WPT Barcelona last year – but he will not be winning the Main Event in Barcelona this year after seeing his pocket Kings cracked by the pocket Sevens of Cesar Garrido in the last level of the day.

More records are expected to be set today as 700+ players are expected to arrive at the Casino Barcelona nurturing a dream of becoming the next EPT millionaire. The previous best of 1,208 players in an EPT Main Event (outside of the PokerStars Caribbean Adventure) will definitely be at risk, as will the patience of players queuing for an eternity to take their seats.

288 players survived Day 1A of the EPT Barcelona Main Event – suggesting that more than 600 will still be in contention when Day 2 starts tomorrow (Tuesday). Those among the chip leaders at the minute include:-