DraftKings Partners with the WPT

DraftKings, the leader in daily fantasy sports, teams up with World Poker Tour in what appears to be a match made in skill games Heaven. 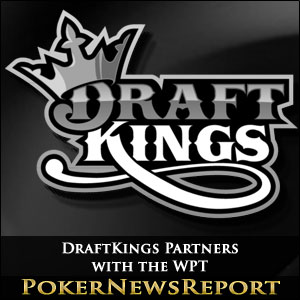 DraftKings, the leader in daily fantasy sports, teams up with World Poker Tour in what appears to be a match made in skill games Heaven.

A few years ago, a conglomerate of marketing professionals set out to do something extraordinary. At first glance, the result of their efforts appears to be nothing more than an aesthetically tempting online poker site. But upon closer examination, it is revealed that DraftKings is not a poker site at all; it’s a masterful fusion of fantasy sports, skill-based gaming, and instant gratification.

It’s obvious why DraftKings appeals to so many. Unlike traditional fantasy sports, users who play on DraftKings aren’t burdened with waiting an entire season to know how they fared. No, within mere seconds of signing up for an account, users can create their own lineup to be used that very same day, in very much the same way that online poker tournaments reward players mere hours after they begin.

Just imagine, winning a 100 player MTT on DraftKings and as a reward being entered into the WPT Championship? Those days my friends are decisively among us. And of course, let’s not forget that the potential is there for poker tournament winners to gain entry into big buy-in fantasy sports events.

The fusion of poker and daily fantasy sports screams of blissful harmony: after all, some of the biggest names in professional poker are avid fantasy players, and vice versa. Both games require a high level of skill, at least a moderate amount of luck and the study of advanced strategies to consistently win.

The only real difference between the two is that fantasy sports is recognized as a skill game by the Federal government, and was therefore exempt from the UIGEA. Poker on the other hand, can be legally played live in most states, but its online counterpart is only regulated by two (soon to be three states) in the US. Although, given the recent push for online poker legislation in states like California and Connecticut, that number seems poised to change.

When asked about the partnership, DraftKings’ VP of Marketing Anthony Pitts stated,

DraftKings is very excited about partnering with the World Poker Tour. DraftKings’ daily fantasy sports is a dream product for poker players. It’s fun and easy to play, accessible, and strong analytic skills give you a decided advantage. We’re looking forward to showcasing out product to the poker community.

Strong words, but given the explosion of daily fantasy sports over the past several years, they’re well-justified.