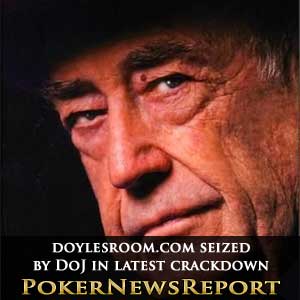 Just as the dust was beginning to settle after the FBI seized the domains and accounts of the worlds largest online poker sites PokerStars, Full Tilt, Ultimate Bet and Absolute Poker, it’s all happening again and this time it’s not just poker!

In total 10 more domain names, the purpose of which was to offer online gambling to US residents, and therefore were accepting players and wagers from the United States were seized by the Department of Justice (DoJ) in the latest crackdown against money laundering and bank fraud.

Along with the domain names taken, three persons involved were indicted with conducting illegal gambling businesses and money laundering.

Bank accounts were also seized which begs the question if players will be able to cash out from their online poker accounts.

The biggest name mentioned in this seizure is of course DoylesRoom.com who have built their online poker site around the face of poker for the last decade – Doyle Brunson.

Earlier this month Brunson had distanced himself from the poker site which continues to use his face to greet visitors to their online portal (until seized anyway). Did Doyle play his cards right and move away from it all just in time?

A major focus point to be taken from the DoJ’s latest move is that this is a crackdown on all online gambling including bing, sportsbook, casino and of course poker. It appears that no-one is safe and operators still accepting bettors from the United States will be asking themselves some serious questions in light of these events.

The latest batch of domains seized:

The three people charge are Darren Wright and David Parchomchuk from Canada, and Ann Marie Puig from Costa Rica. Court dates have yet to be set for any hearings.

It is important to remember that an indictment is not a finding of guilt. If charged with an indictment you are presumed innocent unless and until proven guilty.