On Monday, Doyle Brunson tweeted that he may play two WSOP events. He is also the subject of an extensive HPT profile. 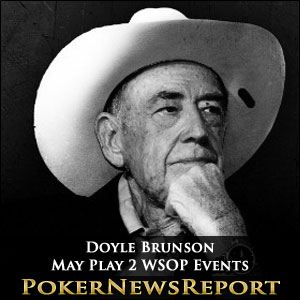 On Monday, Doyle Brunson tweeted that he may play two WSOP events. He is also the subject of an extensive HPT profile.

On May 15th, the poker legend tweeted Afraid I am finally gonna give in to Father Time and pass on tournament play at WSOP. #toomanyhours. His tweet prompted a flurry of say it’s not true tweets from poker fans and pros alike. Doyle’s May announcement wasn’t the first time in the recent past that he had hinted that he was withdrawing from tournaments, but of course not from his regular high stakes cash game schedule.

I possibly could play the 2-7 event and the 50k Horse in this years WSOP. I haven’t set foot in the Rio yet. #cashgamestoogood Brunson tweeted on Monday. Players and fans alike will have to wait until Sunday to find out his decision on the $10,000 2-7 event, or Sunday June 30, for the $50,000 Poker Players Championship. The Poker Players Championship was originally a H.O.R.S.E. event before evolving into the current 8 game mixed format.

Later this year, poker fans will get to see and hear a lot of the legend as he is part of a season long feature on The Heartland Poker Tour (HPT) broadcasts.

Brunson rarely gives on-camera interviews, but did allow an HPT crew to spend the day interviewing him in his Las Vegas home. His wife, Louise, also shared details of their life. This marks Louise’s first on camera interview.

AcePLAYpoker.com is the sponsor of the weekly segment, which is called “A Poker Life”. As fans of poker, we wanted to see Doyle’s stories preserved and made available to fans everywhere, Director Alec Driscoll of acePLAYpoker.com said.

Brunson is considered by many to be one of the best in poker. His career is filled with landmark achievements; from being the first poker player to win a million dollars, to publishing poker’s gospel Super System, to beating an incurable form of cancer in the 60’s.

It is assumed that the series will include some anecdotes of some of Doyle’s early days on the road with Sailor Roberts and Amarillo Slim, as well as some of the more colorful players that he’s come across during his fabled career.

While Doyle appears to be retreating a bit on his tournament “retirement”, the soon to be 80 year old pro, shows no sign of slowing down otherwise.