Doyle Brunson will be the first player to receive a lifetime card from Epic Poker League, allowing the 78-year-old to compete in all of their poker tournaments. 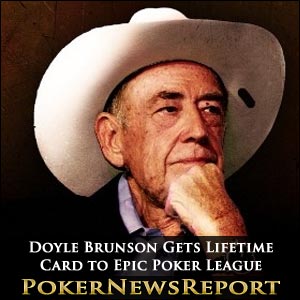 Legendary poker star Doyle Brunson will be the first player to receive a lifetime card from Epic Poker League (EPL), so allowing the 78-year-old to compete in every one of their tournaments.

EPL commissioner Annie Duke – herself something of a poker star with one World Series of Poker (WSOP) bracelet from 2004 – spoke to Oskar Garcia, of The Associated Press (AP), about Brunson, saying he was the obvious choice to be handed the invitation due to his incredible success over the decades, as well as his outstanding contributions to making poker games as popular as they are today.

The 46-year-old, who is the younger sister of two-time WSOP winner Howard Lederer, reckons Brunson manages to combine his undoubted poker skills with a fabulous personality that ensures he is a true symbol of all this is good in the game.

She said: “He just has this secret sauce of every accomplishment you can imagine, big generosity to the poker community, incredible longevity, amazing ambassadorship – and then, on top of that, he’s just an easy guy to really like.”

Former WSOP commissioner Jeffrey Pollack – who is now the executive chairman of Federated Sports + Gaming (FS+G), which owns the EPL – and Duke stated that Brunson is to be honoured tomorrow when the league’s $20,000 buy-in main event kicks off at the Palms Casino Resort in Las Vegas as part of the third stop on the EPL’s inaugural season.

Brunson, who is known as Texas Dolly, already had a two-year exemption from taking part if the league’s qualifiers, but Pollack believes that the elder statesman of poker’s contributions to the game of poker cannot be overstated.

Pollack summed his feelings up about Brunson with a simple statement: “The modern history of poker is Doyle’s life.”

Ten-time WSOP bracelet winner Brunson – who has accumulated about $6.1 million in event earnings, including almost $3 million from the WSOP, over his long career – said he was humbled by the honour, adding that he welcomes the exemption as a reminder of just how much work many players have undertaken to make poker the worldwide success it is now.

Brunson – whose first two WSOP bracelets came way back in 1976 – said: “It’s unnecessary, but I guess it’s nice to be remembered for what we went through to get poker to this point.

“Most people just don’t realise exactly what all transpired…but we went through some pretty adverse things.”

Certainly, poker was considered a backroom, almost seedy, pastime before Brunson and his fellow group of card sharps, named ‘The Texas Rounders’, arrived in Vegas to promote No-Limit Hold’em at the Nevada city’s Golden Nugget Casino.

He added: “Poker had died in Las Vegas. I think that was probably the turning point – I don’t know if poker would have ever gotten off the ground or not.”

The superstar eventually penned poker strategy guide ‘Super System’ in 1979, which numerous players continue to reference even now as the ultimate Hold’em manual, mainly because he wanted to encourage people to take up the game but also to ensure that they received a good grounding in poker.

Brunson believes that was vital in the game’s progression, saying: “It stimulated poker in a way that I don’t think anything else could have.

“The game of poker is about people, and you have to be able to understand people to play poker.”

However, even with this lifetime award, Brunson – who did not take part in the EPL’s opening two tournaments – does not think he’ll up his event participation much.

He added: “As I’m getting older, these tournaments are getting too hard to come through.

“It’s probably not worth it to me any more to really go on the tournament grind, so I don’t plan on playing a whole lot of tournaments the rest of my life. I much prefer to play cash games.”

It is not important that Brunson will most likely not be seen on the tour very often. What is vital, though, is that he has been recognised by the EPL for the amazing things he has achieved over the decades, particularly his ability to spread poker to a global audience.

We thank, Doyle. You are the greatest.