While Brunson has decided to cut back on tournament participations he managed to last the day, even though he didn’t take his seat until the start of level 5. 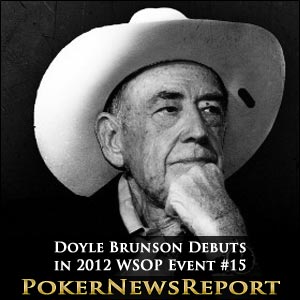 Las Vegas-based Chris Tryba will be hoping for third time lucky in the $1,500 buy-in Seven-Card Stud Hi-Low Split-8 or Better event #15 at the World Series of Poker.

However, the most notable fact about this event so far is that poker’s elder statesman, 78-year-old Doyle Brunson, made his 2012 debut at the WSOP. The 10-time bracelet winner has decided to cut back on his tournament participation this year, but he still managed to last the day in 40th place on 29,000 chips – even though he didn’t take his seat until the start of level 5.

‘The Texas Dolly’ Is In Town!

Poker media veteran and author Nolan Dalla announced over the PA that ‘The Texas Dolly’ was in the Amazon Room, with all those gathered about giving him a warm and welcoming round of applause. Here’s hoping ‘The Godfather of Poker’ can make a play for Phil Hellmuth’s WSOP record of 11 bracelets. Mind you, Phil ‘The Poker Brat’ Hellmuth is also still alive, down in 47th on 26,600, so maybe he can grab that elusive 12th gold bracelet…

Meanwhile, eight-time WSOP champion Phil Ivey made his move early, taking down a huge, four-player pot – which included Pat Pezzin and Alexander Kuzmin – with his quad sixes during level 1.

Eight levels were played out in an event that possesses a $996,400 prize pool, with the likes of Jon Aguiar, Shaun Deeb, Jon Turner, Jeff Lisandro, Matt Glantz and Maria Ho among the most notable casualties.

The leading 24 players are guaranteed at least $9,675, while each final table player is assured of earning $27,012 – although we all know that the biggest prize is what they will all be aiming for.