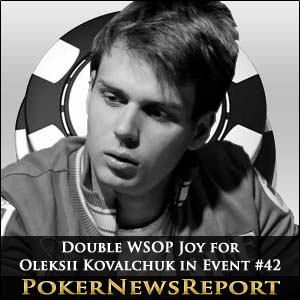 Day 3 of event #42 at the Rio All-Suite Hotel & Casino in Las Vegas saw just 22 players return in search of glory, as well as the $228,014 top prize eventually collected by Kiev’s Kovalchuk after he defeated Germany’s George Danzer in their heads-up clash that left the runner-up with $140,825.

Heads-up play started with 22-year-old Kovalchuk holding almost two-thirds of the chips, although Danzer swiftly evened that up as the lead switched back and forth. Danzer even managed to take a 2 to 1 chip lead at one point, before Kovalchuk won three of four Omaha-8 pots during level 27.

The Ukrainian stayed ahead on the 6♥ 9♠ J♥ flop, while the K♥ turn left Danzer with only four outs to a straight. Unfortunately, for him, the 3♠ river bricked as Kovalchuk’s family and friends mobbed the champion to throw him into the air numerous times.

However, while there can only be one winner, every Day 3 starter made the money, with California’s Charles Kassin the first to hit the rail in 22nd for $6,884.

Meanwhile, Italy’s Jeff Lisandro – who bagged the WSOP Player of the Year award back in 2009 – had started the day as chip leader and aiming to secure his sixth bracelet. He remained in contention through level 20 as the likes of New Jersey’s Allen Bari crashed out in 20th place for $6,884.

Now down to just 15 players during level 21, California’s Norman Chad had taken over as chip leader after scooping a huge Omaha-8 pot against Arizona’s Tom Schneider by making the nut flush and the nut low. Schneider was left crippled and exited in 13th for $10,317 soon after.

Salerno’s Lisandro had struggled after losing a bunch of small pots, and was finally eliminated by Vegas-based Mark Gregorich in an Omaha-8 hand. They were all-in on a 4♠ 7♥ Q♣ 5♣ board, with Lisandro at risk with his A♠ 5♥ 4♣ 3♥. Gregorich held a huge flush draw with his A♦ A♣ 6♣ 2♠, and was rewarded on the 8♣ river that gave him his club flush and eliminated Lisandro.

The nine surviving players were then moved to the feature stage of the Pavilion Room for the unofficial final table. But Pennsylvania’s Brandon Guss, with the shortest stack, quickly exited in ninth for $16,325.

Munich’s Danzer collected two massive Stud-8 pots to zoom into the chip lead, while Chad’s stack began to dip alarmingly. However, it was Mississippi’s Tim Burt who busted in eighth place for $20,966 at the hands of Seattle’s Danny Ratigan in Stud-8. California’s Wing Wong then bust out in seventh place for $27,313 during an Omaha-8 hand with Danzer.

Chad was next to go after the players enjoyed a dinner break. The Los Angeles player just couldn’t get going at the final table, slipping down the leaderboard until becoming the short stack – although he did display a keen sense of humour when crashing out in sixth place for $36,093.

Of course, Chad’s final hand saw him commit the last of his chips, but he also placed his Visa credit card and his AAA (American Automobile Association) card onto the felt as part of the pot! Thankfully, it was all done in fun as Gregorich took down the pot for the knockout.

With Chad out, South Carolina-based Yuval Bronshtein became the short stack and, although he managed to double-up through Kovalchuk during a Stud-8 hand, he finally exited in fifth place for $48,387 when his pair of queens lost out to Ratigan’s straight and low.

Kovalchuk really started to make his move when play became four-handed, and broke through the million-chip barrier following a large Stud-8 pot win against Ratigan.

The Ukrainian then sent Ratigan to the rail in fourth place for $65,812 a few hands later with a wheel, while Gregorich fell short and exited in third for $90,829 to set up the head-to-head clash of Kovalchuk versus Danzer.