Albert Sapiano has enjoyed a fantastic April by adding the GUKPT Thanet main event title to the crown he picked up when winning the Genting Poker Series (GPS) stop. 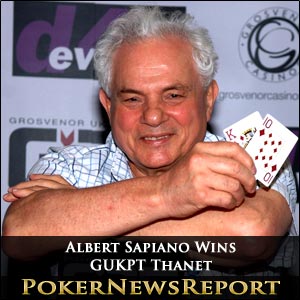 Englishman Albert Sapiano has enjoyed a fantastic April by adding the Grosvenor UK Poker Tour (GUKPT) Thanet main event title to the crown he picked up at the start of the month when winning the Genting Poker Series (GPS) stop at London’s Fox Poker Club.

Sapiano – who is a Palm Beach Casino regular – pocketed £10,720 for winning the GUKPT’s £500+£50 buy-in No-Limit Hold’em Six-Max main event at the G Casino in Broadstairs to top and tail April with successes following his earlier title-winning performance for £48,560 in the £400+£30 buy-in No-Limit Hold’em main event during leg 2 of the GPS in Britain’s capital city.

He also collected a £1,500+£100 Grand Final main event seat for London’s Palm Beach Casino in early December from that earlier victory to ensure he enjoyed an incredible April.

Back to this latest victory and veteran Sapiano outlasted 66 rivals in Kent when dominating the last two days to record a succession of eliminations to ultimately overcome fellow Englishman and tour regular Steve Bovis, who left with £7,700 as runner-up.

Sapiano – whose best previous GUKPT finish had been fourth for £24,400 at the 2007 Brighton £1,000 buy-in No-Limit Hold’em event – was very complimentary about Bovis when discussing his latest success.

He said: This is the hardest man to beat in the poker business. I thought I’d play more of a strategic game – which isn’t my strong point!

Sapiano entered the final table as a massive leader, having more than 50% of the chips in play, and didn’t give up that lead – until he encountered Bovis in their head-to-head.

However, the eventual champion didn’t take long to move ahead of his rival once more as Sapiano overwhelmed Bovis with a series of very aggressive moves that finally sealed his victory with top pair against his opponent’s bottom pair.

At one point, it looked like Bovis would secure the title after taking down a number of big pots, but Sapiano did eventually wrest back the chip lead when both players were all-in on a nine-high flop. With both having top pair, Sapiano’s queen-nine moved ahead when he completed his flush draw to double-up.

That hand left Bovis with about 200,000 while Sapiano had moved above the one million mark and, despite his best efforts, the former was unable to claw back into contention.

That last hand saw Bovis shove all-in when holding bottom pair, only for Sapiano to quickly call with his king-ten having top pair. His hand held to give him the title and also provided him with a seat at the Champion of Champions event come next year at Coventry Football Club’s G Casino at the Ricoh Arena.

The Thanet event – which disappointingly could not surpass the 72 starters for the previous tournament in Stockton that was won by Allan Peers for £11,000 – started with several big-names pros in attendance, including Sam Razavi and 888 Poker Pro player Sam Holden.

However, London-based Holden – who picked up $782,115 for taking ninth place at last year’s World Series of Poker (WSOP) main event – and Brighton’s Razavi, who earned $222,530 for finishing sixth at last year’s Aussie Millions main event, could not make any great impact on the tournament and failed to cash.

Just 30 players returned for Day 2, but that was fairly quickly reduced to just six for the final table when Dean Swift (eighth for £1,170) and John Han (seventh for £1,510) just missed out on the final table, while Holden was the unfortunate bubble boy when his nut straight ran into the rivered flush of Sapiano.

The third and final day witnessed numerous confrontations, with Louis Scriven the first to fall in sixth place for £1,840 when he went head-to-head with Nick Woodward pre-flop.

Scriven’s pocket queens dominated the eights of Woodward, only for an eight to arrive on the turn to give the latter the knockout.

London’s Nathan Lee exited in fifth for £2,430 when Bovis’ ace-queen held, and he was joined at the rail by Hasan Taner soon after.

Hasan Taner Out in Fourth

Short-stacked Taner made his all-in move with queen-two, to be called by Sapiano, who held ace-ten. Another ten arrived on the flop to give the latter top pair and send Taner out in fourth for £3,020.

Now three-handed after just two levels, it wasn’t long before Woodward was eliminated in third for £5,110. Woodward, with ace-three, moved all-in, but was sent packing by Bovis’ pocket sixes.

That left us with Bovis versus Sapiano, with the latter taking the title to leave the former satisfied but knackered.

The GUKPT now heads to Belgium from June 3 to 11, when the Grosvenor Casino in Blankenberge will play host to a €1,000+€70 main event that begins on the seventh and ends on the 11th.