This coming Sunday, Americas Cardroom is raising the guarantee on its “Sunday Special” tournament from $115,000 to $240,000 to celebrate Independence Day. 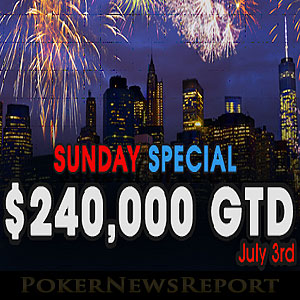 This coming Sunday, Americas Cardroom is raising the guarantee on its “Sunday Special” tournament from $115,000 to $240,000 to celebrate Independence Day.

Americas Cardroom is the flagship skin on the Winning Poker Network, and each Sunday the site hosts a $115,000 guaranteed “Sunday Special” tournament – the most valuable online poker tournament available to players based in the States.

This coming Sunday – July 3rd – the site is increasing the guarantee on its feature event to $240,000 in celebration of the 240th anniversary of the Declaration of Independence. Along the same theme, the site is also offering players a reload bonus of 100% up to $240.00.

About the “Independence Day Sunday Special”

Americas Cardroom´s Independence Day Sunday Special gets under way at the same time as usual (3:00pm ET), with the same buy-in as usual ($215.00) and the same starting stack as usual (10,000 chips). The only difference some players may notice is that the late registration period has been extended from two hours to five hours.

Players buying in or re-entering at the last moment will find themselves in level twenty, where the blinds will be 500/1,000 with a 100 chip ante – so there will still be plenty of opportunities to spin a stack up into a worthwhile prize. Assuming Americas Cardroom gets sufficient entries to reach its guarantee, first place should pay in the region of $45,000 and nearly two hundred players should be in the money.

Plenty of Satellites Scheduled over the Weekend

As usual, Americas Cardroom is pulling out all the stops to qualify as many players as possible into the target event as cheaply as possible. The site is hosting a series of mega-satellites with up to fifty seats available for the Independence Day Sunday Special, with sub-satellite qualifiers for the mega-satellites starting at Freebuy level.

There are also “On Demand” Sit & Go re-buy and add-on games available that potentially represent excellent value. These $3.30 games get underway when just eight players have registered and have late registration available for two hours. Each Sit & Go game guarantees two seats directly into the Independence Day Sunday Special.

Did Somebody Mention an Independence Day Reload Bonus?

Whenever Americas Cardroom is hosting a big event, there is usually a reload incentive involved, and it is no different this weekend. From today until Monday, players making a deposit into their accounts with the Americas Cardroom bonus code “JULY4” will receive a 100% match bonus on their deposit up to $240.00.

The bonus is cleared as normal – by collecting Award Points (at the rate of 5.5 points per dollar) for contributing to the rake deducted from cash game tables or for paying a fee to enter a Sit & Go game or multitable tournament. The bonus will be released in increments of $5.00 per 120 Award Points, and players have thirty days in which to clear the reload bonus after making their qualifying deposit.

Another Million Dollar Sunday on its Way as Well

While this weekend´s celebrations are underway, the team at Americas Cardroom will be planning their next $1 million guaranteed “Million Dollar Sunday” event. Although the dates for the next big tournament have not yet been revealed, it is rumoured that it will be the headline event of a “Bigger Online Poker Series” (BOSS) due to take place in August.

Americas Cardroom is certainly the place to be playing online poker if you like valuable poker tournaments. If you want to know more about the site before joining in with this weekend´s Independence Day celebration, take a look at our [geolink href=”https://www.pokernewsreport.com/americas-cardroom”]Americas Cardroom review[/geolink]. Our review gives you all the information you need to enjoy a lucrative experience at the site, please the Americas Cardroom bonus code that will enable you to take advantage of a 100% bonus on your first deposit up to $1,000.