The BoylePoker International Poker Open has been one of the most popular events on the Dublin live poker circuit for many years, and the 2013 running of the tournament was no different with 1,373 entries over the three starting flights. 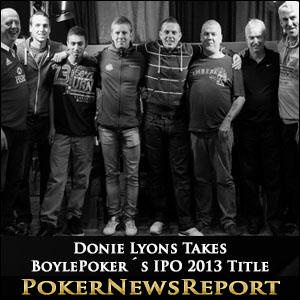 The BoylePoker International Poker Open has been one of the most popular events on the Dublin live poker circuit for many years, and the 2013 running of the tournament was no different with 1,373 entries over the three starting flights.

Day 2 saw 560 players return to the Regency Hotel in Dublin and, after a very long day during which the bubble burst (153 players cashed in the event), 15 players survived to battle it out for the glory of being BoylePoker IPO 2013 champion and take home a substantial cash prize for their €230.00 buy-in.

Daly and Murray Bust and Shine´s Lights Go Out

As the official final table began, players were just a few hands into Level 33 (blinds 120,000/240,000 – ante 25,000). Andrew Hall was the most active player in the early stages, getting a shove through uncontested and then doubling up against Michael Murray J♣ 10♦ > A♦ 4♥ on a four-club board. Cathal Shine also enjoyed some early success –  doubling up against the chip leader with K♠ K♥ over Nyhus´ J♦ 10♦ – but Alan Daly did not enjoy such good fortune, and was the first player to leave the table when his pocket Threes were picked off by Alan McGinn´s A♦ K♣.

Andrew Hall´s good run continued, and he hit a Negreanu-esque board of 5♥ J♠ J♥ / 8♥ / 7♥ to eliminate Michael Murray (A♣ 10♥ > K♣ K♠) but before he could count all his chips had doubled up Donie Lyons A♥ A♠ > Q♦ Q♣. Cathal Shine´s bright start also came to a sudden stop after he had wisely mucked his cards in a massive pot against Kenny Nyhus, but then failed in his recovery mission when his A♠ 10♣ to improve against Alan McGinn´s A♦ K♥ and he was sent to the rail in sixth.

With the departure of Cathal Shine, the five remaining players negotiated a deal which would see each lock up €25,000 with €14,485 to play for. Commentator John O´Shea described his strategy in these situations as being Tight is not right, be as loose as Mother Goose and the players seemed to take his comments on board as the blinds increased to 200,000/400,000 (ante 40,000).

Mustapha Gultekin was crippled after running his Q♠ J♦ into the pocket Aces of Andrew Hall and was bust soon after when his shove with Q♠ 9♠ was called by Kenny Nyhus (A♣ 8♦) and Donie Lyons (10♥ 10♦). Nyhus made two pairs to take the chip lead, but he gave most of his stack to Andrew Hall almost immediately after Hall rivered trip Deuces to best Nyhus´ paired A♠ 9♠.

… … And the Fat Lady Sung after an Hour

It took only one hour after the four players returned from their dinner break to resolve the 2013 BoylePoker IPO title. Alan McGinn was bust in fourth when his A♥ J♠ failed to improve past Donie Lyons´ 5♣ 5♦ and he was joined on the rail by Kenny Nyhus when the Swede moved all-in with A♥ J♦ and received a call from Andrew Hall (K♠ 8♠). The K♣ on the Turn signalled the end of Nyhus´ participation in the tournament and he had to settle for third place after bringing a big chip lead to the final table.

The heads-up lasted just a couple of hands after Donie Lyons had gone into the climax of the BoylePoker IPO 2013 with a substantial chip advantage. Andrew Hall shoved his last 6 million chips into the middle with A♥ 2♦ and was snap-called by Donie Lyons who had been dealt 8♣ 8♥. Lyons managed to fade an Ace and was rewarded with the BoylePoker IPO trophy and first prize of €39,485.