“doneNdusted84” stages remarkable turnaround to win FTOPS Event #1 and $187,484 in price money after a quick heads-up. 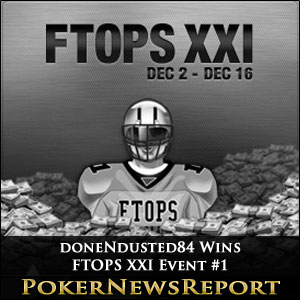 “doneNdusted84” stages remarkable turnaround to win FTOPS Event #1 and $187,484 after a quick heads-up.

There were an incredible 5,482 entries to the first FTOPS event on Sunday night – creating a prize pool of $1,096,400 and smashing the $750,000 guarantee. 720 players cashed in the event, among them Joao Barbosa, James Akinhead and Chris Moorman – but not Full Tilt Pro Victor “Isildur1” who, despite his three entries in the event could finish no better than 2,771st.

Eventual winner “doneNdusted84” overturned a 26 million v 6 million chip deficit in the heads up against “Sgoup” – courtesy of twice doubling up with Ace Queen in the early hands (A♠ Q♠ < A♦ 6♣ and A♠ Q♣ v A♣ J♥). Victory came in a J♥ J♠ (Sgoup) v Q♦ 10♦ (doneNdusted84) showdown – with “doneNdusted84” flopping a Queen to give him victory in the first FTOPS XXI event.

Winner “doneNdusted84” collected $187,484.40 for first place and also $328.92 for another of his entries to the tournament which finished in 590th, as well as collecting a gold FTOPS winner´s jersey and a prestigious gold-jersey avatar to display when playing on the Full Tilt Poker tables in the future. Automatically “doneNdusted84” becomes the temporary leader on the FTOPS leaderboard competition – the winner of which will receive an entry to all the FTOPS XXII events next Spring.

Everybody who made the final table of FTOPS XXI #1 will also receive a limited edition FTOPS jacket in addition to their win, while German player MOPSVILLI was the unlucky bubble boy who finished in 721st and who will invited back for the “Bouncebackability” freeroll on December 22nd.

For all the latest news about the Full Tilt Online Poker Series XXI, results and schedules, follow PokerNewsReport on Twitter for more info.