In a joint venture with hedge fund billionaire Marc Lasry, Donald Trump is planning to grab a stake in the online poker industry once legalization is approved for poker sites to enter the U.S. market. 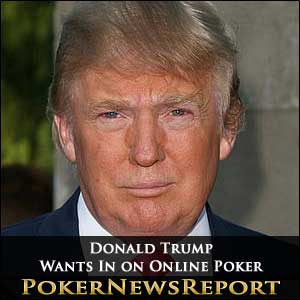 In a joint venture with hedge fund billionaire Marc Lasry, Donald Trump is planning to grab a stake in the online poker industry once legalization is approved for poker sites to enter the U.S. market.

The partnership coincides with support of legalization of internet gambling by several states, including New Jersey, the home base of Trump Entertainment and its casino licenses. Americans wager approximately $6 billion every year with offshore gaming sites. State authorities facing huge budget deficits and casino companies seeking new sources of revenue look at the amount of dollars wagered by U.S. players and want to get a piece of the action.

“It’s just a matter of time,” said Ivanka Trump, Donald’s daughter, executive vice president of development and acquisitions for the Trump Organization, which is the parent company of her father’s real estate holdings. “It would be a tremendous source of taxable revenue for states or the federal government and an enormous generator of jobs.”

The joint venture agreement was filed Oct. 14 with the U.S. Securities and Exchange Commission and prevents the three parties involved to compete against each other by possibly joining in other investment ventures through May of 2012.

Trump Entertainment, coming out of July 2010 bankruptcy reorganization, said in the SEC filing that “the most advantageous way” to enter online gaming “at minimal cost” to the parties would be through the joint venture. “One or more other qualified parties” may also be added as investors, the filing also said.

Ivanka Trump said that the partnership agreement would enable the three main investors to become the largest internet gaming company when legalization is enacted in the U.S. With Trump Entertainment having the necessary licensing, Lasry’s company would be responsible for the capital and Donald Trump would attach his well-known name to the deal.

“In terms of the internet, brand is essential toward attracting players,” the 29-year-old Ivanka said. “The Trump brand would be the most powerful one in this space.”

Establishing an internet gambling site requires a significant amount of capital, said Richard “Skip” Bronson, the chairman of U.S. Digital Gaming Inc., a California-based company known for creating technology software for online wagering. The financial burden is not so costly in actually creating a site. It is the marketing costs associated with establishing name recognition in the industry and persuading people to sign up and play that requires the capital.

“The question is how will you get people to come to the site,” Bronson said. “It takes unique promotions and significant marketing spend.”

The online poker industry was dealt a blow earlier this year when the U.S. Department of Justice filed lawsuits against PokerStars, Full Tilt Poker and Absolute Poker/Ultimatebet, the three largest [geolink href=”https://www.pokernewsreport.com/online-poker-rooms”]online poker sites[/geolink], alleging that the trio attempted to avoid a 2006 federal statute barring banks and financial institutions from facilitating payments to gambling websites that were in offshore locations. The triumvirate dominated the U.S. online poker market even though all were based outside of the U.S.

After the filing of the legal charges, Caesars Entertainment Corp. and MGM Resorts International, two Las Vegas casino companies with substantial interests in live poker, funded FairPlayUSA, a group whose purpose is to advocate the legalization and regulation of internet poker. FairPlayUsa, whose board of directors include Tom Ridge, former U.S. Secretary of Homeland Security and former FBI Director Louis Freeh, are pushing for revisions to the Unlawful Internet Gambling Enforcement Act (UIGEA), enacted in 2006.

At least six states have proposed bills pending that are tied to the regulation of online gambling, Bronson said, and six to 10 more are conducting studies on the issue. Bronson predicts that internet gaming legislation will progress similar to the patterns of state lottery laws, which saw New Hampshire become the first state to legalize the lottery in 1964. Playing the lottery is now permitted in 43 states.

“There will be a domino effect, the same way lotteries started in the 1960s,” Bronson said. Under the UIGEA 2006 statute, online poker sites operating in states where internet betting is legal could accept wagers placed only within those regulated states.

Lasry, a successful investor specializing in distressed debt, took control of Trump Entertainment in 2010 along with a bondholder group when a judge in bankruptcy court ruled that the Lasry group’s bid was more beneficial than other competing bids. Lasry’s winning bondholder group proposed to lessen the casino company’s debt by approximately $1.4 billion and to invest an additional $225 million.

Under the approved plan, Avenue Capital received approximately a 22% share in Trump Entertainment by trading the casino company’s lessened-value bonds for stock and buying additional shares by way of a rights offering. Trump eventually joined Lasry’s bondholder group after his competing bid with another billionaire, Andy Beal, obtained a 10% share of the company for the privilege of using the Trump name.

Trump got started in the casino industry in 1984 with Trump Plaza, but was forced to default on $675 million worth of junk bonds in 1990 from his own Taj Mahal casino and was left no other option but to declare bankruptcy. Following bankruptcy reorganization, in 1995 Trump took his company public as the well-known Trump Hotels & Casino Resorts Inc.

In 2004, Trump Hotels & Casino was again seeking protection in bankruptcy court. When the bankruptcy proceedings were finalized in 2005, Trump stepped aside as CEO, but did retain his title as chairman. The company then renamed itself Trump Entertainment Resorts.

The casino company filed for bankruptcy a third time in 2009. Trump and Ivanka stepped down as board members with Trump still retaining a share of 24% in Trump Entertainment.

Lasry, along with many other successful hedge fund managers, has been known to be quite the poker buff. In a 2007 book called “Hedge Hunters” written by reporter Katherine Burton of Bloomberg News, Lasry was said to be the host of many high-stakes poker games with pots reaching in the thousands of dollars.