Don Nguyen has a handy lead over the rest of the field as the remaining fifty-nine players head towards the money in the WPT Five Diamond World Poker Classic. 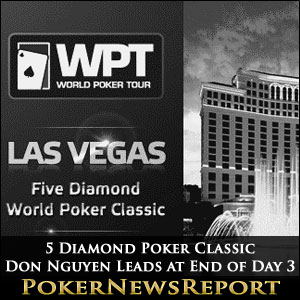 Don Nguyen has a handy lead over the rest of the field as the remaining fifty-nine players head towards the money in the WPT Five Diamond World Poker Classic.

There was a good turn-out for the WPT Doyle Brunson Five Diamond World Poker Classic Main Event at the weekend, as 449 players entered, re-entered, or qualified online for the $10,300 buy-in tournament; creating a $4,355,300 prize pool which will be shared out by the top 45 players, with the winner receiving a cool $1,161,135.

Only 59 players remain at the close of Day 3 – headed by Don Nguyen; who took the biggest pot of the tournament to date when busting Brian Rast´s set of Aces with Q♠ J♠ on a flop of A♦ K♦ 10♠. Rast recovered well to finish the day with an above-average chip stack, but Nguyen soared away after winning the hand to bag and tag 774,500 chips – forty-five big blinds clear of his closest rival.

Day 3 of the WPT Doyle Brunson Five Diamond World Poker Classic Main Event consisted of five 90-minute levels, and started with 140 players still in the hunt for the money. Overnight chip leader Jeff Madsen was dragged back into the pack when doubling up Hyon Kim 10♣ 10♠ > Q♠ J♠ (Full House > Straight), but he recovered to be the first player over 500,000 chips when turning a set of Sevens against JJ Liu and then forcing Rob Salaburu out of a valuable pot with a big bet on the Turn.

Madsen retained his chip lead through the second level of the day, but during Level 13 (blinds 1,000/2,000 – ante 300) the challengers started to emerge. John Holsonback got three streets of value from Antonio Esfandiari when his A♥ K♠ flopped two pairs, and Mohsin Charania knocked Madsen off the top spot when getting all his chips in with 9♦ 8♦ against Madsen´s A♥ K♦ on a flop of Q♦ J♦ 8♣, and the paired Eight holding.

Nguyen Takes Over at the Top – Others Give Chase

The hand mentioned at the top of the page saw Don Nguyen take over at the top of the leaderboard at the beginning of Level 14, and other players also improved their positions as the blinds rose to 1,200/2,400 (ante 400). Eddy Sabat crippled Justin Bonomo when his 10♥ 10♦ flopped a Full House, and Sorel Mizzi indicated that he was in for a deep run when his A♥ Q♣ spiked two pairs.

Day 3 of the WPT Five Diamond World Poker Classic concluded with John Holsonback busting two players in one hand 8♦ 8♥ > 4♣ 4♠ > K♦ J♦ to move into second place, and Mohsin Charania taking 200,000 chips from Sorel Mizzi when his A♣ 4♣ flopped the nut flush to take third spot on the leaderboard.

Day 4 of the WPT Five Diamond World Poker Classic promises to be a tense one. Five more levels of play are scheduled to be completed, during which time the money bubble will burst. Just 45 of the remaining 57 players will get paid in the tournament and, with a min-cash worth $21,700 there will be a lot of reluctance to depart the tables within the first couple of levels.