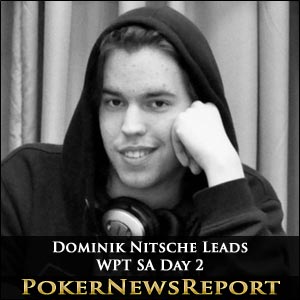 The first ever World Poker Tour to be hosted in South Africa kicked off on Monday at the Emperor´s Palace Hotel Casino in Johannesburg and, despite initial reservations about how popular the event may be, a total of 222 players entered (or re-entered) the $3,300 +$300 Main Event. Of those, 114 still remain in the tournament at the start of Day 2 – headed by Day 1A chip leader Dominik Nitsche.

WPT SA Day 1A in a Nutshell

Day 1A of the WPTSA was a day for the old-timers and the new kids on the block. South African Poker legends Hugh Todd – the only South African ever to win a WSOP Bracelet (1990) – and Raymond Rahme, who finished third in the 2007 WSOP Main Event, were both in attendance as were PokerStars ambassadors Chris Moneymaker and Joe Cada (who is 25 in two weeks time, so a relative old-timer).

Cada was the first of the quartet to bust on Day 1A – running his pocket Kings into the Aces of Evro Psiloyenis during Level 3 – and Chris Moneymaker was to depart before the dinner break after [in his words] losing every flip I´ve played in. Todd and Rahme were both dispatched to the rail by Gideon Scheepers during Level 7 and, although all four players re-entered the tournament on Day 1B, only Joe Cada remains alive.

Just about the time Joe Cada was leaving the card room on Day 1A, Dominik Nitsche late entered into the tournament. Nitsche found himself on a table with Claude Sacks who had been running exceptionally well and who was clear chip leader by the dinner break. However Nitsche was able to build his chip stack when turning trip Kings against Peter Khan and then doubled up against Sacks in the most fortunate of circumstances.

Holding 8x 6x on a board of 8x 4x 2x / Ax, Nitsche moved all-in for his entire stack. Sacks (Ax Qx) made the call, and a Six turned up on the river – giving Dominik Nitsche two pairs and saving his tournament life. The Ax Qx combination came back to haunt Claude Sacks once again towards the end of the last Level of Day 1A – but this time it was Nitsche who was holding it on a flop of Qx 7x 5x. A further Queen on the turn and a Five on the river got all the chips in the middle, with Sacks´ pair of Nines no competition for Nitsche´s tripped Queens.

WPT SA Day 1B in a Smaller Nutshell

Day 1B of the World Poker Tour was a much busier than its predecessor and, in addition to the re-entries from Day 1A, the field was joined by such notables as Liv Boeree, McLean Karr, Jerome Bradpiece and Melanie Weisner – who, fresh from her victory in the $1K 6-Max side event – turned a set of Aces to bust out Chris Moneymaker (two pairs) and elevate herself towards the top of the leaderboard.

However, the chip leader at the end of the night was Sunil Devachander, who put an end to the promising run of birthday boy Jason Hartman when betting his pocket Aces intelligently to get all his chips in the middle after turning a third Ace on a paired flop to give him a full house against Hartman´s paired Ace. Hartman finished the day with 52,000 chips after at one point having more than 250,000 in front of him. Devachander finished Day 1B with 215,800 for second place overall.

Devachander was closely followed by Wesley Weigand (212,800) who crippled McLean Karr late in the day, while a number of players crossed the 100,000 chip barrier including Jerome Bradpiece – who turned a Broadway straight to eliminate Lagen Zachary (Kx Jx – flopped top pair) – and Melanie Weisner, who was dealt pocket Threes towards the end of Level 6, had the good fortune to flop a full house (Threes over Tens) and get three streets of value against Bennie Lingenfelder with the chips she had won from Chris Moneymaker.

When play starts this afternoon at the Emperor´s Palace Hotel Casino, players will be entering Level 11 – with blinds of 600/1,200 and an ante of 200 chips. Re-entries are still available until 2.00pm local time (12.00 noon GMT) so it is not yet known how many entries there will be in total, how much money will be in the prize pool and who is going to get paid.

Those who will not be worrying about re-entering the tournament include:-