It may have been the result that many people expected going into today´s World Poker Tour final table, but Dominik Nitsche was made to work for his victory. 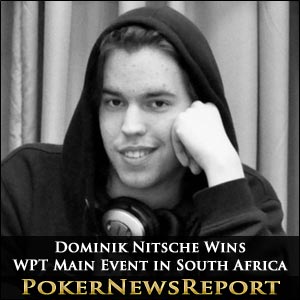 It may have been the result that many people expected going into today´s World Poker Tour final table, but Dominik Nitsche was made to work for his victory.

A quick, but intriguing, final day´s play at the inaugural WPT South Africa saw Dominik Nitsche win his first ever WPT Main Event after a battle with Jerome Bradpiece which, at one point, saw UK poker player take the lead for the first time in the tournament.

The start of the final table played out pretty much as expected considering the massive chip advantage Nitsche took to the climax of the Main Event. Short-stacks Andrew Anthony and Wesley Weigand were taking it turns to shove their chips in and pick up the blinds (15,000/30,000 -ante 5.000), but it was Jerome Bradpiece who benefitted from the first significant action.

Anthony and Weigand continue their strategy of shoving whenever possible, and it was a mis-timed Anthony shove that saw his elimination in sixth place when he bet all-in with K♥ Q♥, only to be called by Jerome Bradpiece (10♥ 10♠). Bradpiece´s pocket pair held and took him temporarily within spitting distance of the chip leader.

Dominik Nitsche was still on the form we witnessed yesterday and he dismantled Jason Strauss in two consecutive hands. First he him hit trip Eights to cripple his opponent and then took the last of his chips when Strauss shoved with 2♣ 2♠ and could get no help from the board against Nitsche´s J♥ J♦.

At this point, Nitsche had 75 percent of the chips in play in front of him and despite doubling up both William Ross (K♥ J♣ > 3♠ 3♥) and Jerome Bradpiece (Q♣ Q♠ > 6♣ 6♥) still held a substantial lead. The lead was extended further still when Nitsche followed Bradpiece (3♥ 3♣) all the way to the river to turn over A♦ J♥ for a flopped pair of Aces.

Queens played a big part in determining who was to present the strongest challenge to Dominik Nitsche. First of all Wesley Weigand (A♠ 9♥) got all his chips in against William Ross (Q♦ Q♠) but failed to fade the Ace he needed and was eliminated in fourth, immediately after which Ross got all his chips in the middle with A♦ 10♦, but could not find the Ace to master Jerome Bradpiece´s Q♦ Q♣.

Nitsche Wraps the Tournament up in Two Big Hands

Dominik Nitsche was able to chip away at Jerome Bradpiece´s advantage and then wrapped up the tournament in two big hands. First of all he reversed the deficit be having a better kicker when both players paired an Ace in their hand on the flop, and then his pre-flop shove with A♣ 4♣ was called by Bradpiece, who was holding J♣ 10♣.

It has been a splendid year to date for the 22 year-old from Germany. Only this month he won a side event at the EPT San Remo to add to his WSOP bracelet in July and, in the past twelve months has enjoyed deep runs in major tournaments in eight different countries on three different continents. With this victory, Dominik adds $206,153 to his burgeoning bankroll and a deserved international title.