The Grand Final of the Italian Poker Tour Series V was won by Domenico Drammis, who collected €130,000 for his win and a sponsorship package for next season. 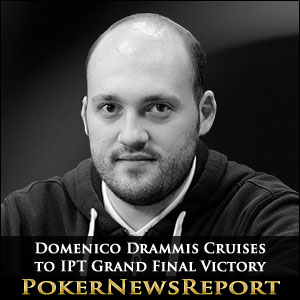 The Grand Final of the Italian Poker Tour Series V was won by Domenico Drammis, who collected €130,000 for his win and a sponsorship package for next season.

Season V of the PokerStars-sponsored Italian Poker Tour (IPT) drew to a close at the weekend, with the Grand Final of the five-leg series played at the Casino de la Vallee in Saint Vincent, near the Swiss-Italian border.

The €630.00 + €70.00 buy-in Main Event was an accumulator tournament, which allowed players three opening flights to win as many chips as possible to carry forward into Sunday´s Day 2. Consequently the event attracted 914 entries, with 250 players carrying decent stacks into Day 2, and 64 players still in the hunt for the top prize when the game resumed on Day 3 (Monday).

The 55-player bubble burst when IPT Nova Gorica winner Claudio Di Giacomo (unnecessarily) moved all-in with J♣ J♠ and was called by Roberto Ghidini with A♦ K♠. The A♣ on the flop saw Di Giacomo leave the Casino de la Vallee prize-less, while the remaining fifty-five players were assured of a €3,100 minimum cash.

Play continued late into Monday night until a final table of nine was set. Taking the chip lead during the final 3 action of Day 3 was Domenico Drammis, who would win the IPT Series V leaderboard challenge – and a sponsorship package for IPT Season VI – if he held on to win the IPT Saint Vincent Main Event.

Domenico Drammis took control of the IPT Saint Vincent Final Table from the start, and he used his big stack to force players out of valuable pots and quickly extend his lead. Even when he did not have the best hand pre-flop, Drammis was finding the cards to win big pots – as Riccardo Lacchinelli found out when moving all-in with K♥ K♦ and getting a call from Drammis. Drammis tabled K♠ 8♠ and completed his flush on the River (3♠) to send Lacchinelli to the rail in ninth place.

Lacchinelli was soon followed by Ivan Gabrieli, who left the tournament in eighth after moving all-in with pocket Queens against Drammis´ Ace-King, and discovering his fate when the A♠ was the window card on the flop. Only Gianpaolo Eramo enjoyed any luck against Drammis – doubling up against the chip leader before busting Antonio Leotta in seventh 2♥ 2♠ > K♣ 10♦ to move into second place on the leaderboard.

As the game went six-handed, Domenico Drammis stepped up the aggression – and stepped up his luck. Sebastien Claude Didelot reckoned he had found a good opportunity to call one of Drammis´ pre-flop shoves when he was dealt A♥ Q♠, and he was well ahead of Drammis´ Q♦ J♥ until the J♣ spiked on the River to send Didelot out of the IPT Saint Richard Grand Final in sixth.

Davide Costa bust in fifth shortly after being crippled by Eros Nastasi (K♠ J♥ > K♦ 2♥), but Nastasi´s participation in the IPT Saint Richard Main Event was not to last much longer – getting crippled himself when running his A♥ Q♣ into Gianpaolo Eramo´s A♣ 3♣, and seeing Eramo pair his Three on the flop; and being eliminated in fourth when Domenico Rao´s A♣ Q♥ held up against Nastasi´s 10♦ 6♠.

Domenico Drammis´ domination of the IPT Grand Final continued during three-handed play, and he took a massive ten-to-one chip advantage into the heads-up after eliminating Domenico Rao in third A♦ A♠ > 2♥ 2♦. There was not a great deal that Gianpaolo Eramo could do, faced with such a chip mountain to climb, and the final hand simply confirmed that the IPT Grand Final title was destined for Drammis.

Eramo got the last of his chips into the middle of the table with A♣ 3♦, and the call came from Drammis – who had been dealt A♦ 7♦. The flop of 4♦ Q♦ 5♥ gave Eramo hope of a runner-runner straight, but Drammis´ hand improved to a diamond flush on the river, to give him victory in the IPT Saint Richard Grand Final and victory in the series leaderboard challenge by just one point.