Many players question why the DoJ would accept responsibility for reimbursing Full Tilt’s U.S. players and the answer may be simple–money. 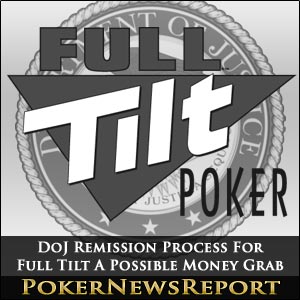 Many players question why the DoJ would accept responsibility for reimbursing Full Tilt’s U.S. players and the answer may be simple–money.

There has been considerable speculation in the online poker industry as to why the U.S. Department of Justice (DoJ) would take on the burden of paying U.S. players the money owed them from Full Tilt Poker, as opposed to letting PokerStars handle the task–as they reportedly wanted to do. Many industry observers are tossing around reasons why the DoJ would want to distribute the funds following the settlement that allowed PokerStars to acquire the assets of Full Tilt.

One reason, obviously, is that the Internal Revenue Service (IRS) would be certain of receiving their cut from the funds distributed to players. It has yet to be announced or determined, but there is a strong likelihood that players will be required to pay Uncle Sam a portion of their account balances as income prior to obtaining reimbursement. There are an unknown number of recreational players who may be mildly profitable on the virtual felt, yet do not report winnings to the IRS as the money involved may be just a few hundred or a couple thousand dollars. The remission process may be the DoJ’s chance to hold players accountable for their winnings.

Another reason bandied about centers around the belief that a majority of the player account balances on Full Tilt are only a couple hundred dollars or so and that the hassle of filing claims and dealing with both the DoJ and IRS is something that a number of players may want to avoid. Filing a claim may cause the DoJ to look at bit more closely at the financial transactions in recent years of those players submitting claims to see if, perhaps, certain players may not have been completely forthright in reporting income to the IRS in the past. In other words, some players who may have the skill to be consistent winners of perhaps a few thousand a year as a supplemental income and fail to list such winnings on their tax returns may want to avoid filing to remain under the radar of the DoJ and IRS. In that regard, the DoJ will attain the assets of those players who choose not to file a claim.

Yet another reason is that the DoJ plans to assess an administration fee on each and every claim submitted. A portion of that fee will certainly go to the firm that wins the bid to handle the “Claims Administrator–Full Tilt Poker” position that was posted on the DoJ website and is expected to garner a considerable number of applicants from claims administration firms who have experience in such matters. The job posting itself stated that there is $159 million in forfeited funds less expenses of administration that are now immediately available for distribution via the remission process. If the DoJ decides to take just $5 from each of the roughly 1.3 million claimants after also allocating a few bucks for every claim to the firm chosen to handle the job, that’s $6.5 million in profit.

Although the DoJ received $225 million from PokerStars recently and has enough cash on hand to pay U.S. players 100% of their account balances on Full Tilt, don’t believe for a minute that that’s what will happen. It is not likely that players will receive only the money that was deposited at the site and not their entire winnings as some industry critics have speculated since news of the settlement broke. But you can be sure that several hands will be in the till–those of the DoJ, the claims administrators, and perhaps the IRS–prior to U.S. players’ Full Tilt accounts being distributed.