The U.S. Department of Justice (DoJ) website is actively recruiting an administrator to process claims made by Full Tilt players from the U.S. 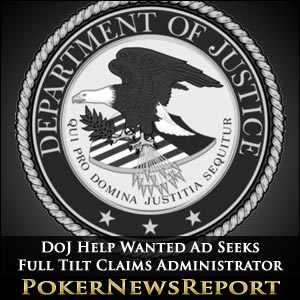 The U.S. Department of Justice (DoJ) website is actively recruiting an administrator to process claims made by Full Tilt players from the U.S.

The Black Friday indictments that resulted in U.S. poker players being shut out from playing at [geolink href=”https://www.pokernewsreport.com/online-poker-rooms”]major poker sites[/geolink] put an estimated 50,000 poker players from America out of work–some of whom have taken up residence in foreign countries to continue playing at sites like PokerStars and PartyPoker. The recent settlement between PokerStars, the DoJ and Full Tilt that will reimburse players who have had money frozen on the site since last year will create at least one job–albeit not as a player. The DoJ has posted an ad to hire a “Claims Administrator–Full Tilt Poker.”

Seeking an individual who can design and execute a process to solicit, receive and evaluate claims, and to process payments, for losses incurred by U.S. victims that are attributable to the fraud alleged in U.S. v. Pokerstars et al., the DoJ is accepting applications to fill the position through Aug. 31. Applicants must report any previous contact with companies in the realm of online poker and gambling that might affect their abilities to impartially process claims.

The posting estimates that approximately 1.3 million U.S. players are owed money from Full Tilt and that roughly $159 million is immediately available for distribution via the remission process. The money is on hand due to a payment from PokerStars of $225 million to the DoJ just a few days ago that was the first of four scheduled payments to be done annually for three years that will total $547 million as per the agreement for PokerStars to acquire the assets of Full Tilt. An additional $184 million will be distributed to non-U.S. players upon the relaunching of Full Tilt in early November, making for a total of $731 million to purchase the site.

The DoJ could have avoided the whole remission process, as PokerStars reportedly was willing to reimburse U.S. players along with players not on American soil. But for reasons that remain unclear, the DoJ accepted the responsibility of paying U.S. players. Whether they did so in order to collect taxes on the money can only be a matter of speculation at this point.

The Poker Players Alliance (PPA) last week offered assistance to the DoJ in creating a streamlined and accessible process to help reunite players with their seized funds. However, nothing has been forthcoming from the DoJ on whether or not they will accept help from the PPA in facilitating the claims made by players.