As a result of the indictments issued by DoJ, Blanca Gaming of Antigua, the parent company of Absolute Poker and Ultimatebet, has declared bankruptcy. 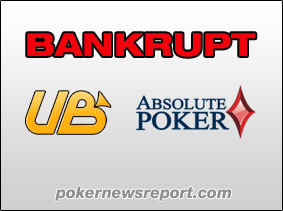 Blanca Gaming of Antigua, the parent company of Absolute Poker and Ultimatebet, has declared bankruptcy. This comes in the wake of Black Friday and the indictments issued against three of the biggest poker companies in the business on Friday 15th of April 2011. The 11 founders of PokerStars, Full Tilt Poker and Absolute Poker were declared criminals and now face the threat of prison. The US demanded billions in tax, which has proven too much for Absolute poker to front. Rumours had begun to circulate within the poker community that Blanca Gaming declaring themselves bankrupt was inevitable, particularly after Absolute Poker and Ultimatebet were forced to lay off 300 staff in an attempt to meet costs. This amounts to approximately 95% of the entire Costa Rican operations centre, who are now unemployed.

The parent company of the poker rooms has opted to file for bankruptcy in Norway according to Madeira Fjord, who represent the company’s shareholders there. Blanca Gaming has now sent e-mails to all shareholders outlining their bankruptcy plans. According to the company, they have “no cash on hand and no prospects for any cash flow for the foreseeable future.” They also made it clear they are unable to make any payments towards their current debt obligations, adding: “Blanca has further advised that there will be no future payments.”

Speculation has now arisen that players with pending pecuniary transfers may have to accept that their money is dead. Considering Absolute Poker and Ultimate bet have played host to some of the biggest and most successful names in online poker, this seems highly unfair. As has been shown with PokerStars and Full Tilt, some online players’ accounts held hundreds of thousands, even millions, of dollars. PokerStars have now begun the laborious process of returning player funds, and it is expected that Full Tilt will soon follow suite. For the other two targets of American justice, it does not seem even a remote possibility.

Founded in 2003 and licensed by the Kahnawake Gaming Commission, Absolute Poker and UltimateBet, both of whom operate on the Cereus Network, grew to become two of the biggest presences in online poker. They even managed to survive a cheating scandal back in 2007. For now, however, their future has never looked blacker, or less hopeful.