Dmitry Yurasov emerged as the chip leader in the EPT Prague High Rollers Event after a full Day 2 of action which saw a number of big names fail to cash. 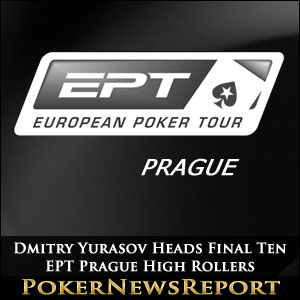 Dmitry Yurasov emerged as the chip leader in the EPT Prague High Rollers Event after a full Day 2 of action which saw a number of big names fail to cash.

Day 2 of the EPT Prague High Rollers Event saw the 84 survivors from Day 1 joined by seven late registrations, to bring the total number of entries for the tournament up to 176 (137 unique entries and 39 re-entries) and create a prize pool of €1,724,800 which would be shared out by those in the top twenty-seven places.

Despite the huge prizes for those who achieved a cash in the event (a min cash was worth €27,500 and top prize is €382,050), there were an alarming number of early exits, and players such as Yann Dion, Pratyush Buddiga and Darren Elias crashed out of the EPT Prague High Rollers within the first couple of hands.

Some of the early eliminations were just down to pure bad luck, and Morten Klein was just one of a number of players who was to suffer bad beats on Day 2 of the EPT Prague High Rollers when getting bust out J♣ J♦ > K♥ K♠ by Mike McDonald when the J♠ spiked on the River.

Aces continued to be cracked throughout the day – November Niner Marc Etienne McLaughlin cracking Bertrand Grospellier´s pocket Aces with a flopped set of Tens – and fate took its revenge on Dimitir Danchev for the earlier elimination of Robin Ylitalo, when he doubled-up Bryn Kenney A♥ K♣ > A♠ A♦ after the board of 5♥ 10♥ J♣ / 4♠ / Q♣ was dealt.

Hand-for-hand play started after David Vamplew´s Queen´s failed to hold against Andreas Eiler´s Ace-King, and looked as if it was going to be Bertrand Grospellier who was going to be the EPT Prague High Roller “Bubble Boy” after he shoved all-in with A♣ 7♣ and ran into Thomas Muhlocker´s J♥ J♠. However, the 7♥ on the flop paired Grospellier´s hand and the 7♦ on the River gave him Trip Sevens to keep the PokerStars Team Pro alive in the event.

Instead, it was another PokerStars Team Pro who was bust out of the money – Eugene Katchalov. Katchalov got the last of his chips in with 7♣ 7♥ and Muhlocker called – again with pocket Jacks. On this occasion, there was no Seven on the River to rescue Katchalov, and he was eliminated in twenty-eighth place – ensuring that the surviving players were guaranteed a min-cash of €27,500.

A flood of eliminations followed including Shannon Storr (A♠ K♣ < Mike McDonald´s 10♣ 10♠), Steve O´Dwyer (K♦ Q♠ < McDonald´s A♠ 9♠) and Martin Kahbrel (K♠ Q♣ < Dmitry Yurasov´s A♣ K♦) in a hand that saw Yurasov move into the chip lead. Bertrand Grospellier´s luck deserted him, and he was bust in twenty-third place by Olivier Busquet (A♣ 10♦ > 5♣ 5♠) and Day 1 chip leader Georgios Karakousis left the event in twenty-second place when his J♠ 10♥ failed to improve past Joao Viera’s Q♣ Q♦.

The post-dinner level (Level 17 – blinds 4,000/8,000 ante 1,000) saw several more significant exits. Kent Lundmark was eliminated by Dimitir Danchev 5♠ 5♥ > A♥ J♠ before Danchev himself was to be eliminated by Max Heinzelmann A♣ J♠ > J♣ J♦. Jonathan Little´s snowmen (8♣ 8♥) were rivered by Andy Seth´s A♥ Q♦ and Eureka Main Event runner-up Ami Barer was unlucky to crash out of the tournament in eighteen when Max Heinzelmann paired (A♥ 4♥) paired his Four to best Barer´s A♠ K♠.

There were also some significant upward movements among the players that remained. Despite busting Bertrand Grospellier earlier, Olivier Busquet’s chip stack had dwindled to just eight big blinds before a double-up against Bryn Kenney (A♠ 8♦ > Q♥ 10♠) gave him some chips to work with, and he used them with style – hitting a Full House with K♥ 10♣ and taking a valuable pot from Oleksii Khoroshenin before rivering a King-high flush to take 240,000 chips from Jeffrey Rossiter.

Oleksii Khoroshenin recovered from the hand against Busquet to bust out Andreas Eiler A♣ 10♦ > 8♦ 8♠ and Bryn Kenney A♠ J♠ > K♠ 9♠, and Thomas Muhlocker finished Day 2 third in chips after eliminating Ariel Mantel A♦ A♣ > A♠ Q♦ and crippling Mike McDonald with a rivered set of Deuces. However, worryingly for the nine remaining male poker players in the EPT Prague High Rollers, Vanessa Selbst was a rock throughout yesterday´s action, and she closed Day 2 with the elimination of Benjamin Pollak in eleventh place (A♦ K♠ > A♠ 10♥) to carry an “average” chip stack forward into this afternoon´s conclusion.

Yurasov Cooks Tuna (and other puns) to Head Final Table

When play resumes at the Prague Hilton this afternoon, the ten remaining players will be facing blinds of 10,000/20,000 with a 3,000 chip ante. Dmitry Yurasov has a comfortable lead courtesy of busting out Akin Tuna in the penultimate level of the day – a level which presented us with a number of opportunities for word play – see how many you spot!

Akin Tuna had entered Level 19 short of chips after doubling up Vanessa Selbst 6♥ 6♣ > J♥ 9♥, but had doubled-up against Dmitry Yurasov (K♥ J♥ > 3♦ 3♥) and Andy Seth (A♥ 5♦ > A♦ J♥) when making an Ace-Five straight on the River. Another double-up against Jeff Rossiter (Q♥ Q♣ > A♠ Q♦) saw Akin Tuna recover to have a workable stake, but he lost the lot in a Q♠ 8♠ -v- A♣ K♦ confrontation against Yurasov when he went fishing for a spade Flush draw and was cooked in seventeenth plaice.