Russian poker player Dmitry Varlamov won the Unibet Open in Troia, Portugal, at the weekend after a frantic conclusion to the international poker tournament. 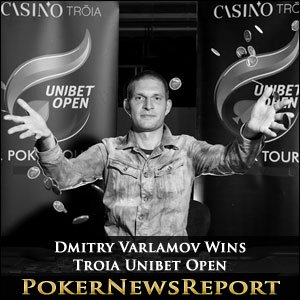 Russian poker player Dmitry Varlamov won the Unibet Open in Troia, Portugal, at the weekend after a frantic conclusion to the international poker tournament.

The Unibet Open was the first ever major poker event to be hosted at the Troia Casino – just to the south of Lisbon in Portugal – and attracted 242 players to the €1,650 buy-in Main Event, including a large number of players who had qualified through online satellites played on Unibet.fr.

Just one qualifier remained when action at the final table started – Pierre Almeida; but he held a substantial chip advantage over the rest of the field after a strong finish to Day 2 and was the only player to breach the 1 million chip barrier.

When players took their seats for the conclusion of the tournament on Sunday, 17 minutes remained in Level 18 and, with blinds of 5,000/10,000 (ante 1,000), only two of the nine remaining players seemed to be in danger of a quick elimination.

The only Portuguese player to make the final table was the first to depart, after coming an unlucky second in a clash of the short-stacks. Zbigniew Wieczorek (A♠ Q♣) shoved all-in from the hijack and was called by Fernando Rocha (A♦ K♣) in the Big Blind. The Portuguese player looked in great shape to double up until the Q♥ appeared on the Turn and Rocha was bust in ninth.

Meanwhile, at the top of the chip stacks, Dmitry Varlamov had changed places with overnight chip leader Pierre Almeida after six-bet jamming his chips in some serious pre-flop action. We were never to see Varlamov´s cards as he raked in the ½ million chip pot but Almeida open-folded A♥ K♥.

Two hours of relatively quiet play followed until Laurens de Smet tried to push the action by moving all-in from the button with 7♥ 6♥. De Smet was called by Zbigniew Wieczorek (A♠ J♥) and the A♦ on the flop enabled the Pole to double-up once again.

Now crippled down to his last 11,000 chips, de Smet (A♦ 10♦) chopped the next pot with Michal Karbowski (A♥ J♣) when the board produced a spade flush, but then ran his K♥ 6♥ into the K♦ 7♠ of Dmitry Varlamov and the 7♥ on the flop (the lone heart on the board) signalled the end of the Belgian´s participation in the tournament.

Mateusz Moolhuizen was chasing his second Unibet title after victory in Malta in 2011, and did his chances of winning the Troia Unibet Open no harm when forcing Pierre Almeida out of a million chip pot and then busting Auke Attena from the tournament A♣ K♣ > A♠ 7♦.

The Dutchman then eliminated Michal Karbowski in sixth in an almost identical hand A♦ K♥ > A♥ 7♥ and then rivered the Q♠ to send Krzysztof Stuchlik to the rail in fifth K♠ Q♥ > A♦ 9♠. Going into four-handed play, Mateusz Moolhuizen held a narrow chip advantage over Dmitry Varlamov and Zbigniew Wieczorek, with Pierre Almeida now struggling as the short-stack.

Wieczorek Goes From First to Bust in Two Hands

Zbigniew Wieczorek shot into the chip lead when his set of Tens bust Almeida in fourth place, but was soon himself reduced to the short stack after folding under pressure from Mateusz Moolhuizen on a board of J♦ 5♦ Q♦ / 2♠ in which Moolhuizen implied that he had made the diamond flush.

In the next hand, Wieczorek became the aggressor and moved all-in on a flop of 7♦ 2♦ 2♠ with 7♥ 8♦. Moolhuizen called with A♠ 7♠ for the same two pair but with a better kicker, and the board concluded Q♠ / 3♠ to eliminate Wieczorek in third place and give Moolhuizen a narrow 2.5 million -v- 2.3 million chip advantage going into the heads-up against Dmitry Varlamov

Everything Goes Varlamov´s Way in Heads-Up

There was only one way the chips were heading during the first few hands of the heads-up – straight towards Dmitry Varlamov. The Russian forced Moolhuizen out of a series of valuable pots with a series of post-flop and post-turn bets which resulted in the Dutchman relinquishing his hands – and his chips – without a showdown.

Dmitry Varlamov extended his chip advantage to 3.5 million -v- 1.3 million when his J♠ 8♣ caught a spade flush on the river, and then the tournament was all over when Moolhuizen tried to bluff Varlamov out of a million chip pot with nothing more than Queen-high.

Following the 4♦ on the River, the action really intensified. Moolhuizen checked, but Varlamov bet 300,000. Moolhuizen – who still had 900,000 chips behind – decided to move all-in and Varlamov snap-called for two pairs against Moolhuizen´s air.

36 players shared in the €363,000 prize pool for the Troia Unibet Open, with Dmitry Varlamov´s victory in the tournament being worth €80,187 – his first entry on his Hendon Mob database! Pierre Almeida received €26,789 for being the highest placed qualifier, while the last Portuguese player in the event – Fernando Rocha – at least did not have to pay a lot to travel home.