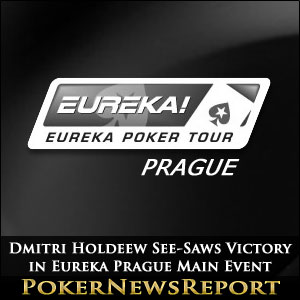 There was a fascinating conclusion to the PokerStars-sponsored Eureka Prague Main Event yesterday, as the chip lead changed hands multiple times during the final eight-handed table. Ultimately, German poker player Dmitri Holdeew emerged as the winner of the tournament, but it was not a result anybody could have forecast when the players took their seats for the climax of the tournament.

Going into the final day, PokerStars qualifier Ami “Uhhmee” Barer had a commanding chip advantage over Stephen Chidwick and Dmitri Holdeew, with PokerStars Team Pro Marcin Horecki also still a live contender for the Eureka Main Event title. With thirteen minutes remain in Level 27 (blinds 30,000/60,000 – ante 5,000), both Johannes Tiefenbrunner and Milan Simko were the short stacks, but Simko in particular had shown incredible resilience to stay in the tournament.

Simko Off to Cracking Start – Tiefenbrunner and Horecki First to Leave

During the first orbit of the button, Johannes Tiefenbrunner had seen his chip stack dwindle to a dangerously low 650,000 chips, and he had become the shortest-stack player. Consequently, when he called Milan Simko´s A♥ Q♦ shove with pocket Sevens, Tiefenbrunner was the player at risk. The Q♥ on the flop paired Simko´s hand, and Tiefenbrunner was the first player to depart the Eureka Prague final table.

In contrast, Marcin Horecki´s chip stack had remained fairly constant despite the PokerStars Team pro hardly being involved in any of the action during the first hour. As the Level 29 started, and the blinds increased to 50,000/100,000 (ante 10,000), Horecki became more active, and that was ultimately to prove his downfall in seventh place – shoving with A♠ 9♦ and failing to find the Ace he needed to improve past Mark Dalimore´s 9♣ 9♥.

Milan Simko´s charmed life seemed to go on forever but he can consider himself unlucky to have bust from the Eureka Prague when he did. A chopped pot against Ami Barer A♦ J♠ -v- A♥ J♦ (with three spades on the board) could have been better for the Czech player, but a double-up against Dmitri Holdeew (J♦ 10♦ > 2♠ 2♣) gave him a little more breathing room.

Ultimately the increasing blinds caught up with Simko, and he was forced to shove from out of position with A♠ 10♥. Dmitri Holdeew made the call with 9♥ 9♠, and Holdeew´s pair held to eliminate Simko in sixth. Mark Dalimore´s exit from the Eureka Prague final table was much more straightforward. Dalimore shoved pre-flop for 4 million chips with King-Queen and was snap-called by Dmitri Holdeew, who had been dealt Aces. The Aces held and Holdeew was catapulted into the chip lead with more than 10 million chips.

Ami Barer recovered the chip lead in the next significant pot without even being involved in the hand. Dmitri Holdeew (10♦ 8♣) set Stephen Chidwick (Q♦ 8♥) all-in after the flop of 3♦ 7♦ 8♦ and Chidwick doubled-up to more than 7 million chips when his top kicker kept him alive in the tournament .

The chip lead in the Eureka Prague Main Event continued to see-saw throughout three-handed play, until Dmitri Holdeew won consecutive hands against Stephen Chidwick (forced Chidwick out of the pot on the River) and Ami Barer K♠ 7♠ > 4♠ 4♣ to chip up to 12.6 million. Barer battled back, and took the lead when rivering a Full House with Q♣ 10♦ to snatch back the chip lead again.

However, it was Dmitri Holdeew who was to take a 14 million -v- 11.4 million chip advantage into the heads-up against Ami Barer after he Turned a set of Sevens to bust Stephen Chidwick (K♥ 10♣) in third place. The heads-up was to last almost two and a half hours, during which time the chip lead would change many times again.

The heads-up climax to the Eureka Prague Main Event mostly saw plenty of hands seeing flops, but only small pots being contested. The exception to this generalisation was when Ami Barer shot into the lead with an 8♣ 8♥ > 4♠ 4♥ double-up, which temporarily gave him a 6.5 million chip advantage. A succession of small pots in favour of Dmitri Holdeew saw him level up the chip stacks and even take a narrow lead when his J♣ 4♣ flopped Trip Jacks.

Barer battled back; and the chip lead see-sawed for more than an hour until a dynamite hand sealed the destiny of the Eureka Prague Main Event.

Then, following the 9♥ on the Turn, Barer again checked to Holdeew. Holdeew fired out 1.5 million chips and Barer responded by announcing he was all-in. After a count, Holdeew made the call and the cards were on their backs.

The K♦ was dealt on the River and, although it made Ami Barer a pair, it was not enough prevent Dmitri Holdeew winning the hand and the Eureka Prague Main Event.