ISPT marketing boss, Georges Djen, has claimed that his comments about the ISPT needing 15,000 players before it would go ahead were mis-translated. 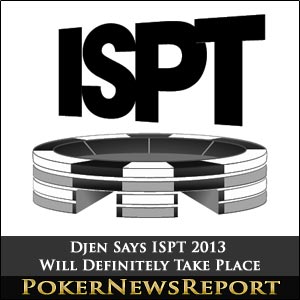 ISPT marketing boss, Georges Djen, has claimed that his comments about the ISPT needing 15,000 players before it would go ahead were mis-translated.

A number of poker news web sites (including PokerNewsReport) published a story earlier this week quoting Djen as saying the International Stadiums Poker Tour at Wembley next May would need at least 15,000 players before the event took place. The quote was taken during an interview with the ISPT head of marketing by German reporter Tobias Frey on behalf of pokerstrategy.com; however Mr Djen claims that his comments were mis-interpreted.

In a move intended to clarify the situation, the ISPT marketing department issued a statement through the French poker news web site – www.iGamingFrance.com  – in which it was claimed that the comments made by Mr Djen were “clearly misinterpreted by the German journalist, maybe due to the language barrier”. The statement went on to say:-

“Mr. Djen was asked the minimum amount of players ISPT had to gather in order to be financially interesting. His answer was crystal clear, stating that it was financially interesting between 15,000 players and 17,000 players, without mentioning a cancelling possibility whatsoever.” The ISPT Marketing statement also went to great lengths to stress that “the event will definitely take place”.

The ISPT statement is possibly the most positive piece of news to the come out about the event in recent months. Of the tens of thousands of poker players that the ISPT want to fill Wembley in May, few will care which big names are chosen to be walking advertising signs for the ISPT or whether the tour announces a side-event schedule now or next May.

Most poker players want the ISPT Wembley event to go ahead and want to be there, but they also want to know that the goalposts at Wembley are not going to be moved again! Marketing statements such as that provided to iGamingFrance last night will enable more players to have faith that the ISPT Wembley will take place but, if they really want it to be a success, they should re-instate the guarantee!