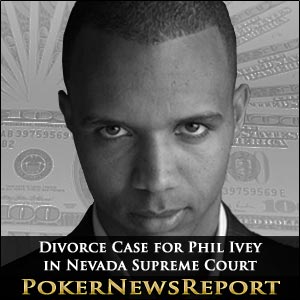 The suit claims that Phil Ivey made a $5,000 campaign donation to the Nevada Family Court Judge who heard their divorce case and subsequent petitions and that the campaign money may have colored the judge’s decisions.

In making the contribution, Ivey did not break the law. In Nevada individuals may contribute up to $5,000 to a judge’s election campaign. Judges may not solicit contributions if they are running unopposed. The judge in question did have an opponent.

The timeline for the contribution and the judge’s decision-making does possibly hint at impropriety but it in no way confirms wrongdoing. Even Luciaetta Ivey’s lawyer admitted this in court.

In 2009, Ivey, who is now 35 and has eight World Series of Poker bracelets, and his wife filed a joint petition for divorce, which was awarded by Clark County Family Court Judge William Gonzalez. The Iveys, who have no children, had been married seven years and in that time Phil Ivey had earned about $12 million and the couple’s community property had a value the year before estimated at $8 million.

The poker pro was ordered to pay spousal support, which he did for some time. However with the advent of Black Friday and the failure of Full Tilt Poker, Ivey, and many other professional poker players in the U.S., fell on hard times, and he ceased payments to his ex-wife. That’s what brought Luciaetta Ivey back to court in 2011.

Between the granting of the divorce and the couple’s return to court, Phil Ivey contributed $5,000 to the judge’s reelection campaign and attorney David Chesnoff, who represents the poker player, also contributed time and money to the campaign.  That was in In April 2010. It was in 2011 that Luciaetta Ivey requested that Judge Gonzalez enforce the court’s ruling that her ex-husband pay required spousal support. After filing the suit, she learned that her former husband had made the contribution to the judge’s campaign.

It was then that her lawyer, Bruce Shapiro, requested that Judge Gonzalez be removed from the case. That motion was denied and then appealed. The appeal was lost too. And based on that lost appeal, Shapiro took his argument to the State Supreme Court arguing that the contribution to the reelection campaign created an appearance of impropriety.

The arguments, which were made yesterday before the Nevada Supreme Court, took a total of 45 minutes. Chief Justice Michael Cherry led the seven-judge panel hearing the case. According to the Las Vegas Review Journal, Luciaetta Ivey’s attorney observed that very few people donated the maximum allowed, as Phil Ivey did, to those running for election to the Family Court and that between the poker player’s donation and help and cash from his legal team, the judge received a total of $12,543 in contributions. That amount was more than was raised in total by judge Gonzalez’s opponent.

Attorney Shapiro noted at the end of his argument before the court, Nineteen other judges could hear the case.

It was David Chesnoff, the attorney for Phil Ivey, who argued that the poker player’s ex-wife had received millions in payments from him and that the effects of Black Friday and Full Tilt’s demise were the cause of his inability to pay any more. He also noted that the divorce was uncontested, there were no children involved and that in essence Ivey has fulfilled his obligations to his ex as best he could.

This is not the first time that judges in Nevada have been under scrutiny for possible impropriety in associated with cases heard involving those who made contributions to their campaigns. Although the justices hearing the case raised questions regarding Shapiro ‘s arguments no decision was rendered. The court will render a decision at a later date. That decision could send Phil Ivey and his former wife back to Family Court, which could cost the poker champion millions.