Divita Claims Players Will Boycott EPL Due to Ethics 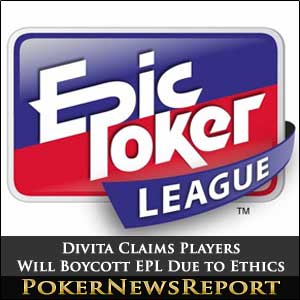 Michael DiVita – the player who allegedly “withdrew” from the Epic Poker League Main Event 2 after it was discovered he was a registered sex offender – has made claims on the popular 2plus2 poker forum that several of the Epic Poker League´s players would boycott the next EPL Main Event unless he was given the balance of the $20,000 he “won” by qualifying for the feature tournament via a Pro/Am satellite.

DiVita´s Version of the Story Unfolds

This latest poker news unfolded only days after the disgraced poker player appeared on QuadJacks radio giving his own account of the events that took place on September 6.

On the poker news radio station he denied having chosen to voluntary withdraw from the Main Event, claiming he was pressured into it by the Epic Poker League.

DiVita related to listeners that he had received a telephone call from Stephen Martin – the chairman of the Epic Poker League’s Standards and Ethics Committee – in which he claims he was told, “It would be in the best interest of Epic Poker not to let you play“.

DiVita accepted the decision of the Epic Poker League until he found out he was not to receive a refund of the $20,000 Main Event seat that he had won, but his buy-in to the $1,500 Pro/Am through which he qualified. Reversing his decision to “withdraw voluntarily” from the EPL Main Event, DiVita was reportedly told by Martin “We will stop you. It will get very public and probably very embarrassing for you“.

During the radio interview, and again on the 2plus2 poker forum, DiVita gave notice that he was allowing the Epic Poker league until the 23rd September to issue him with a cheque for the remaining $18,500 before filing a lawsuit against them. He also stated that he was prepared to go to the Nevada Gaming Commission and bring the issue to a more public media if the Epic Poker League failed to “do the right thing”.

A Boycott or Not?

DiVita declined to reveal the names of the players who had contacted him, but stated that they were prepared to boycott the next EPL Main Event not on his behalf, but on behalf of the poker community as a whole and the unethical way in which the Epic Poker League has handled the situation to date. It would be no surprise to see an even smaller field than the 97 players who turned up last time buy-in for the December 14th tournament with it a) being so close to Christmas and b) having a “mix-max” format with ever an ever-decreasing number of players per table.

Annie Duke, Commissioner for the EPL, must be privately jumping up and down for joy. With the DiVita scandal following on so closely from “Chino-Gate”, the EPL is getting more publicity through its ethics policy than any PR company could provide. Forking out $18,500 to make DiVita go away is less than the overlay that was in the last pro/Am tournament. Of course, the EPL could refuse to pay DiVita due to the precedent it would set – but even the biggest critics of the league cannot claim it is not making an impact on the world of live poker!