South African Divan Le Roux has pocketed $197,000 for triumphing at the APT Philippines main event overcoming a 254-player field with a $615,950 prize pool. 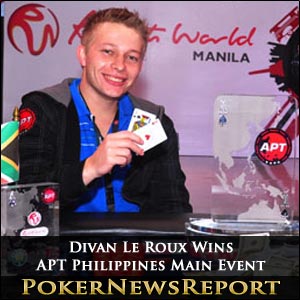 Le Roux – having made the 10-handed final table second in chips – eventually beat fellow Springbok Conrad Coetzer in what was a thrilling heads-up clash at the Resorts World Manila’s Genting Club that left the runner-up with $104,000.

However, the reigning Aussie Millions champion failed to maintain his charge to eventually hit the rail in fourth place for $37,000, while Guam’s Franklin Acfalle took seventh for $18,500, home favourite Nicandro Filart – who was attempting to become the fourth successive Filipino to win the title after Neil Arce (2009), Michael Cua (2010) and Enrique Del Prado (2011) – exited in sixth for $24,600, South Korean Han Wook Kim picked up $30,800 in fifth and China’s Ryan Hong left with $49,000 in third.

Incredibly, this is only Le Roux’s second cash after he also enjoyed some success in Manila last December when earning $10,697 for finishing fourth in the PHP45,000 No-Limit Hold’em main event of the Manny Pacquiao World Poker Event.

All the chips hit the middle after 34 hands for a showdown for the title. On the button, chip leader Le Roux open-shoved before Coetzer made the call. Le Roux showed A♥ J♣ while Coetzer tabled Q♦ 9♥ for the former to be well ahead pre-flop.

However, the J♦ 8♣ 6♦ gave Le Roux top pair, although the 7♣ turn did give Coetzer some more outs. But the 4♥ river was no help to Coetzer and Le Roux was crowned champion for easily his biggest live tournament cash.

Monaghan, following folds by Steicke and Martins, looked down to see A♦ K♥ and quickly moved all-in for his final 175,000. The action folded around to big blind Speidel, who then called with Q♣ Q♠ to put Monaghan in danger.

Speidel stayed in front on a 10♠ 9♥ 7♣ flop to leave Monaghan way behind. However, while the Q♥ on the turn handed Speidel trip queens, it also gave Monaghan four gutshot outs to the straight.

But no jack arrived on the river as the dealer turned over the 5♦ to send Monaghan to the cashier in 10th place and take Speidel above one million chips.

Hong Kong high roller Steicke was out in ninth place not long after. The hand started with Coetzer, under the gun, raising to 21,000 and Speidel calling, before Steicke – in the hijack seat – shoved all-in for about 120,000.

Coezter quickly folded as Speidel – after getting a count – casually called to show 7♣ 7♦. Steicke tabled A♠ 10♠ for what was a coin-flip showdown. However, the 5♣ 6♦ 6♥ Q♦ 6♣ board only served to give Speidel a full house as Steicke hit the rail.

The next level saw Martins knocked out in eighth place following a succession of three losing hands. The Portuguese player had been moving along nicely until first doubling-up Coetzer, then seeing his 9♣ 9♦ lose out to Hong’s J♦ J♠ on a board that read 7♦ 2♣ K♠ K♦ A♥.

With only 47,000 chips left, Martins shoved all-in from under the gun to receive a call from big blind Speidel. The Aussie showed 10♣ 2♠ in his attempt to eliminate another opponent, while Martins revealed A♦ 6♥ to be well in front pre-flop.

The K♥ 6♠ Q♣ gave Martins bottom pair, leaving Speidel requiring runner-runner or a ten for the knockout. Of course, the turn is the 10♦ to now hand Speidel the lead, while the K♠ confirmed Martins exit.

Franklin Acfalle Out in Seventh

The elimination of Acfalle in seventh place also saw Speidel chopped down to 770,000 chips as Le Roux doubled-up for a huge chip lead on 1,450,000.

The short-stacked Guam player moved all-in for 113,000 while under the gun, before Le Roux merely called and was then followed by another all-in move from big blind Speidel.

Le Roux took his time but eventually called to show Q♥ Q♠ and be well ahead of the J♣ 10♣ of Speidel – who was most likely attempting to isolate – and the A♠ 6♠ of Acfalle.

The J♥ 4♠ 5♠ was an interesting flop as it handed Speidel a pair of jacks and Acfalle a flush draw. However, the Q♦ on the turn gave Le Roux trips to have Speidel beaten and Acfalle needing a spade to stay alive. The J♦ on the river filled up Le Roux for a full house to send the Guam pro out in seventh.

Nicandro Filart Can’t Make it Four Filipinos In a Row

Filart was the last remaining Filipino, but couldn’t survive beyond sixth place when losing out to Speidel during level 25 when running his Jd-Jh into the Aussie’s Q♥ Q♠. In the hijack seat, Filart shoved all-in, only for Speidel – on the button – to make the same move.

The South Korean did, however, take the lead on a 6♠ 4♥ 10♣ flop that gave him middle pair, while the 9♣ turn also handed the Asian a backdoor flush draw to leave just two aces for Le Roux to score the knockout. The A♥ was the river card, of course, and the unlucky Kim was off to pick up his winnings for a fifth-place finish.

Incredibly, Speidel, Coetzer and Le Roux had met at a final table once before when the Aussie took the top prize for winning the Manny Pacquiao World Poker Event late last year. Coetzer took seventh in that tournament while Le Roux exited in fourth, but it wasn’t to be another glorious triumph for the Aussie Millions champion as he hit the rail in fourth place this time.

Speidel had been left crippled after his all-in move from the big blind while holding Ah-Js was called by button Coetzer, who tabled 6♥ 6♠. Speidel was chopped down to just 30,000 chips when the board came 4♦ 10♣ 5♦ 5♠ 5♥ to give the South African a full house and about 1.5 million chips.

The Melbourne pro put his final 25,000 into the middle on the next hand, while small blind Le Roux limped in and big blind Hong checked. The 10♦ 9♣ 7♠ flop saw Hong and Le Roux check down the hand as Speidel’s A♦ 8♦ lost out to the South African’s 5♥ 2♣ after he hit bottom pair on the turn.

The fatal blow was delivered by Coetzer, however, in the next hand when big blind Hong re-raised the South African’s initial raise of 110,000 by 70,000 to leave him with just 30,000 behind.

Coetzer made the call to see an 8♦ 4♥ A♣ flop and Hong placed his remaining chips in the middle to receive a call from his opponent. Hong showed K♠ 9♦ to have the lead against the Q♠ J♦ of Coetzer, only for the 10♠ turn to give the Johannesburg native a few additional outs to a straight. The 9♠ river completed Coetzer’s queen-high straight to set up the thrilling head-to-head with Le Roux.