Despite the hype associated with the start of 2012 WSOP, the turn out for the first WSOP Donkament (min buy-in NL Hold´em tournaments) has been disappointing. 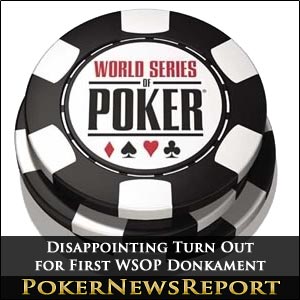 Despite the razzamatazz and hype associated with the start of the 2012 World Series of Poker, the turn out for the first WSOP Donkament (min buy-in NL Hold´em tournaments) has been disappointing.

The lack of players was not lost on those that did turn up. John Juanda tweeted Playing WSOP Event #1. Just got to my seat: Amazon Tan; #352, seat 9. Place is more quiet than I expected. More like a sanctuary than zoo while Kevin “Kevmath” Mathers summed up the general feeling by tweeting Gloom and doom already with ~ “only” 2k players for #WSOP2. Players were not the only things missing from the World Series of Poker, as the organisers had failed to supply enough “One Drop” water coolers and the banners of former WSOP Champions Russ Hamilton (UB scandal) and Chris Fergusson (FTP scandal) were also conspicuous by their absence.

Phil Ivey in the House…  and Out Again

One player who did make an appearance was eight-time bracelet winner Phil Ivey. Ivey, who was back in Sin City after boycotting last year´s series, sent Twitterland crazy as his presence was announced to the world, but his impact on this event was short-lived – his 10♥ 10♠ being outdrawn by Maria Ho´s J♦ 10♣ shortly after the beginning of Level 5. Other notable early departures included 2010 WSOP Player of the Year Frank Kassela, who ran his pocket Kings into the Aces of James Young and everybody´s least favourite Canadian – Daniel “DNegs” Negreanu – who flopped trip Jacks only to be busted by a player who rivered quad 6s.

Some Notables Who Survived

Among those who survived Day 1 of this three day event, Phil Hellmuth tweeted that he was “thrilled” to have 44,600 chips at the end of Day 1 (average 39,300). His up and down day included hitting quad Aces and coming from behind in a 44 –v- JJ race. UK poker player John Eames seemed more relieved than anything to be returning later today and will be joined by John Juanda, Vanessa Selbst and Jason Mercier who all had successful days. Overnight chip leader Sadan Turker (158,100 chips) came second in a donkament last year, and he holds a narrow lead from 2007 WSOP bracelet winner Eli Elezra (155,900 chips).

Looking Ahead to Day 3 of the WSOP

After a low turn-out for the first open event of the 2012 World Series of Poker and a 13% reduction in the number of players competing in the casino employee´s tournament, organisers will be grateful that the Heads-Up Event #3 starting today is limited to 512 players and that Event #4 – the 7 Card Stud Hi/Lo tournament – only attracted 606 runners last year. Maybe, as the temperatures soar to over 100º F this weekend, the WSOP will also heat up too!