Irishman Trevor Dineen pulled off a last-to-first shock on the final table of the Irish Poker Championship in Galway to capture the title and €39,450 first prize. 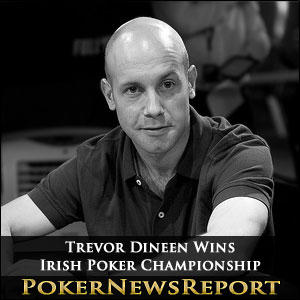 Irishman Trevor Dineen pulled off a last-to-first shock on the final table of the Irish Poker Championship in Galway to capture the title and €39,450 first prize.

There were incredible scenes at the Full Tilt Poker Village in Galway last night, when Trevor Dineen achieved one of the unlikeliest comebacks seen this year in a live poker tournament. Entering the seven-handed final table in last position with 17 big blinds in front of him, the man from Cork had an apparently insurmountable mountain to climb against chip leader Steve O´Dwyer, but Dineen started the day with a flyer and eventually beat O´Dwyer in the heads-up.

Queens Get Dineen off to Best Possible Start

A slow start to proceedings saw the only major action within the first hour being a double by Ian Gasgoine at the expense of Max Silver (Kings > J♦ Q♦), but then the fireworks began to fly – Trevor Dineen doubled-up against Steve O´Dwyer (Queens > K♦ J♣) and then eliminated Peter Murphy in sixth (Queens > A♣ J♥) when Murphy failed to find the Ace he needed to survive.

Dineen was all-in again soon after – and was at risk of being eliminated in a 7♦ 6♣ -v- 4♠ 6♦ confrontation with Max Silver after Silver had flopped a straight (5♦ 7♣ 8♦) and Dineen had turned trip Sevens (7♠). Fortunately for Dineen, the 4♥ on the river chopped the pot, but Silver never really recovered from failing to win the hand and was bust in sixth when his 10♠ 2♥ bluff was called by Marc McDonnell who had flopped two pairs.

Gasgoine Up and Down as Hall Tumbles in Fifth

At the bottom of the chip stacks, Thomas Hall saw the opportunity for a double-up when he got all his chips in pre-flop with A♦ K♥ and was called by Steve O´Dwyer who had been dealt 6♦ 6♥. Unfortunately for Hall, he missed all his outs and was bust in fifth. Incredibly, the chip leader – Gasgoine – was soon to follow him. After chipping up O´Dwyer (Deuces < Kings) and doubling up Marc McDonnell (A♣ Q♣ < K♣ 10♠ King paired), Gasgoine (pocket Fives) was again in confrontation with McDonnell (J♥ 7♥), and was eliminated from the Irish Poker Championship in fourth when McDonnell flopped two pairs (J♦ 7♠ 3♠).

Then McDonnell Crashes to Give O´Dwyer Heads-Up Chip Advantage

In the same way that Ian Gasgoine´s brief flirtation at the head of the Irish Poker Championship led to his downfall, Marc McDonnell was soon to be eliminated from the tournament. In the first of three losing hands, he saw his K♦ Q♠ come second to O´Dwyer´s A♦ K♥ to chip O´Dwyer to over 700,000 chips and allow him to regain the chip lead.

Then, in a three-handed pot already worth 200,000 chips, Trevor Dineen (K♥ J♣) moved all-in on a board showing Q♠ J♣ 10♥ / 4♣. McDonnell (8♣ 9♦) made the call and was well ahead as O´Dwyer folded. However, the A♣ on the river gave Dineen the nuts straight and crippled Mc Donnell, who was soon eliminated from the Irish Poker Championship when Steve O´Dwyer´s pair Ace (A♣ 8♦) was too good for McDonnell´s Nine-high.

Despite going into the heads-up at a near 2:1 chip disadvantage, Trevor Dineen was soon in control of the climax to the Irish Poker Championships. An early hand in which Dineen rivered a better two pair than O´Dwyer´s flopped two pair gave him the chip lead for the first time in the event and – unlike Gasgoine and McDonnell before him – Dineen was able to use his larger chip stack to great effect – reducing Steve O´Dwyer down to 180,000 chips against his own stack of 1.1 million chips.

The final hand was a classic race – Dineen shoving with A♦ Q♦ and O´Dwyer calling with pocket Tens. The flop of 8♥ 6♦ J♥ gave O´Dwyer hope of a valuable double up, but the Q♥ on the Turn and J♣ on the River enabled Dineen to benefit once again from Queens and scoop the Irish Poker Championship.