James Martin won the GukPT Reading Main Event after pocket Tens (aka ‘Dimes’) were responsible for both launching him into contention and taking down the event. 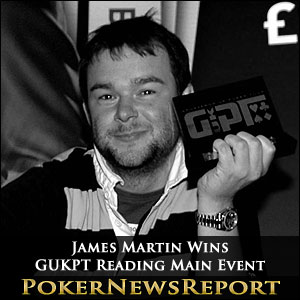 James Martin won the GukPT Reading Main Event after pocket Tens (aka ‘Dimes’) were responsible for both launching him into contention and taking down the event.

Leg 5 of the Grosvenor UK Poker Tour produced another guarantee-busting field this weekend at the G Casino in Reading, as 167 players qualified for – or bought into – the £500.00 GukPT Reading Main Event.

After two Day 1s and an extended Day 2, nine players remained in the quest for the £23,950 first prize – headed by Timotheos ‘Tim Tim’ Timotheou and local favourite Adam ‘Buzz’ Howlett; who had held the chip lead for most of Day 2 until Timotheou ran amok in the last few hands of the day.

Possibly due to the vast experience of the players in GukPT events (this was Jeff Kimber´s seventh GukPT Main Event Final Table), the action got off to a subdued start. John Burberry achieved a vital double up when his A-10 found two pairs to best David Lloyd´s K-Q and Timotheos Timotheou chipped up when flopping trip sixes to cripple Alex Zeligman.

James Martin found a pair of Nines good enough to take a substantial number of chips from both Timotheou and Adam Howlett at the beginning of Level 20 (blinds 6,000/12,000 – ante 1,500) and David Lloyd was able to recover from his earlier loss when turning trip Jacks to take 120,000 chips more from Adam Howlett.

Players Start to Fall as Chip Stacks Lose their Value

The action picked up considerably at the beginning of Level 21 (blinds 8,000/16,000 – ante 2,000) as several players saw their stacks now worth less than twenty big blinds. John Burberry was twice able to double up with pocket pairs holding against James Martin and Jeff Kimber, but Martin was quickly chipped up again when Paul Dunne shoved pocket Eights from the Big Blind and ran straight into James Martin´s pocket Tens. Dunne out in ninth and Martin up to 720,000 chips.

The second player to depart was David Lloyd, whose roller-coaster final table experience was brought to a close by Timotheos Timotheou (A-Q > 10-10 – Timotheou flopped trip Queens), and then John Burberry´s luck deserted him on another shove, this time with A-J against the A-6 of Alex Zeligman, but Zeligman hit a Six on the Flop to chip him to over 600,000 chips.

Ellie Biessek also doubled up against Zeligman (A-10 > Q-5) – before Alex Zeligman failed to improve with A-10 against the pocket Kings of Jeff Kimber and was eliminated in sixth – and the Biessek touch played a vital role in eliminating Timotheos Timotheou; as the former chip leader had his chip stack dented by Biessek (A-A > A-J), hammered by Jeff Kimber (Q-Q > A-10) and then bust by Biessek (K-K > A-6) to leave the tournament in fifth.

Tens Do it for Martin

Jeff Kimber moved into a commanding chip lead after eliminating Adam Howlett in fourth place (6-6 > A-9), but Kimber almost immediately doubled up Ellie Biessek (J-J > A-7) who became the new chip leader, before she donated a stack of her chips to James Martin – who then became the chip leader in a very tight contest.

The first of two significant hands involving Tens saw the departure of Ellie Biessek in third place. On the flop of J-10-6, Biessek (J-8) got into a raising war with James Martin (10-8) which saw Biessek all-in and Martin just covering her. Another Ten on the Turn gave Martin trips, and a substantial chip advantage going into the heads-up.

The heads-up lasted just one hand – Jeff Kimber shoving with A-J and getting a call from James Martin with pocket Tens. The flop of 8-7-8 still gave Kimber a one-in-four chance of winning the hand, but a Six on the Turn reduced those odds considerably and a Ten on the River gave James Martin a set of Tens and victory in the GukPT Reading Main Event.

A deal prior to the heads-up saw both players lock-up £18,000, so James Martin´s first prize was a little under the advertised £23,950. However, he also picked up a GukPT winner´s trophy and a seat at the £400,000 guaranteed GukPT Grand Final in November.