The Global Poker Index has released details for the 2016 GPI World Cup, which has been expanded from last year´s event to accommodate twelve teams. 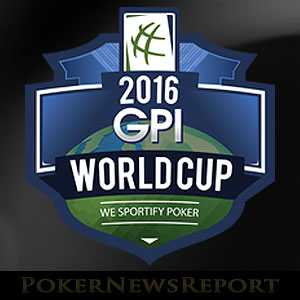 The Global Poker Index has released details for the 2016 GPI World Cup, which has been expanded from last year´s event to accommodate twelve teams.

According to the press release from the Global Poker Index, the 2016 GPI World Cup is going to be a “must-see” event. Twelve teams will be battling it out for the prestige of being considered the best poker nation in the world, with the Final Four playing out the climax of the event in the iconic “Cube” arena.

Spectators who want to witness the action are getting plenty of notice. The dates and location of the 2016 GPI World Cup are yet to be announced, but the indication is that the two-day event will be played towards the end of the year – possibly after the conclusion of next year´s World Series of Poker Main Event.

Who Qualifies to Enter the Event

The twelve teams will be selected from four regions – North America, South America, Europe and Asia/Pacific. The top ranking nation in each region will automatically be invited to compete in the 2016 GPI World Cup, as will Italy due to them winning the 2015 version of the event.

The seven other nations will be chosen based on their 2016 World Cup rankings – these being determined by each nation´s top seven players in the Global Poker World Index as at July 20th 2016 (when the World Series of Poker comes to an end) plus the top three players from each nation´s 2015 GPI Player of the Year race (as at 31st December 2015).

Each team of four players will consist of the two mostly highly ranked players in each nation´s Global Poker Wold Ranking (as at July 20th 2016), the winner of each nation´s 2015 GPI Player of the Year race and a wildcard entry – probably depending on who is available at the time!

The Format of the Event Revealed

The format of the event has also been revealed. The twelve teams will be divided into three groups of four. The four teams in each group will play against each other in three preliminary round matches, with the winner of each group progressing to the Final Four. There will be a playoff between the nine teams who do not automatically qualify for the climax of the event to determine who gets the fourth seat in the Final Four.

The way that the format has been developed gives relatively minor poker-playing countries the chance to take the glory at the 2016 GPI World Cup. For example, Australia are likely to qualify for the event as the leading nation in the Asia/Pacific region and a team consisting of Jeff Rossiter, Jonathan Karamalikis, Andrew Hinrichsen and Joe Hachem could easily give some of the top American and European stars a run for their money.

In addition to Australia and Italy, the other teams likely to qualify automatically for the 2016 GPI World Cup are the USA, Argentina and Germany as the three highest-ranked countries from North America, South America and Europe respectively (although there is time for the rankings to change). Other teams likely to join the automatic qualifiers include the UK, Spain, France and Russia.