Details of the sixth Spring Championship of Online Poker were announced last night, with 45 events scheduled over fifteen days between May 4th and May 18th. 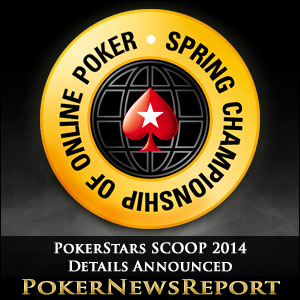 Details of the sixth Spring Championship of Online Poker were announced last night, with 45 events scheduled over fifteen days between May 4th and May 18th.

PokerStars revealed last night that the Spring Championship of Online Poker (SCOOP) 2014 will get underway in a little over two weeks on Sunday May 4th and will include forty-five events that will be played in eighteen different disciplines and fifteen different formats.

Each of the forty-five events will have “Low”, “Medium” and “High” buy-ins – so there will be 135 different tournaments altogether – with each buy-in range having its own leaderboard competition offering packages to next year´s EPT Monte Carlo Grand Final and PCA 2015 for the winners and WCOOP/MicroMillions tickets to the runners-up.

PokerStars have played it pretty safe with guarantees they are offering for the events in SCOOP 2014. In total the series will have a $40 million guaranteed prize pool with thirteen individual tournaments guaranteeing $1 million or more.

However, last year´s Spring Championship of Online Poker paid out $75,585,305 in prize money (the biggest online tournament series in poker history); smashing the record set the previous year when $65,332,179 lined the pockets of successful players in SCOOP 2012.

Good Mix of Games to Suit Everyone

Within each discipline, some games will be played with bounties (including a progressive super-knockout event), while others offer re-buys or re-entries. Mixed poker fans will appreciate the inclusion of HORSE and 8-Game tournaments.

The winners´ prizes in each of the SCOOP 2014 Main Events are, in reality, likely to be much higher. Last year “MLiz” collected $198,015 for his (or her) first place finish in the “Low” SCOOP Main Event, while “nicofellow” collected $472,209 for their victory in the “Medium” ME. Biggest winner of last year´s series was Victor “Isildur1” Blom, who added $1,096,200 to his bankroll when defeating Noah Boeken heads-up in the SCOOP “High” Main Event

Leaderboards and Player of the Series Prizes

Each buy-in (“Low”, “Medium” and “High”) will have its own leaderboard competition running alongside the two weeks of the series, with points being awarded to everybody who cashes in a SCOOP event.

Players who achieve the best results will be rewarded with tickets to future WCOOP and MicroMillions Main Events, while the winner of each leaderboard competition will receive a SCOOP trophy and a package to PokerStars´ Caribbean Adventure next January.

The individual player who performs the best across all buy-ins will win a superb all-expenses package to the EPT Monte Carlo Grand Final in May 2015, but players will have to work hard to win that prize. Last year´s Player of the Series Eric “AceQuad” Brix managed nineteen cashes, seven of which were at the final table.