The dates and venues for the joint PartyPoker/Dusk till Dawn Grand Prix Poker Tour have been released plus details of a £100,000 leaderboard competition. 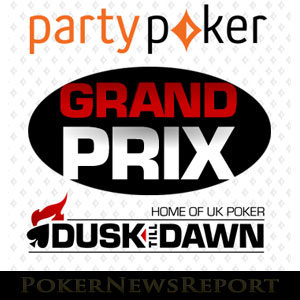 The dates and venues for the joint PartyPoker/Dusk till Dawn Grand Prix Poker Tour have been released plus details of a £100,000 leaderboard competition.

The joint venture between Party Poker and Dusk till Dawn has not been much of a secret. Dusk till Dawn´s Rob Yong wrote a blog back in February with his initial thoughts about the “tour”, but such is the scale of the project that it has taken a little while to organise.

At last, nearly all the dates and venues have been confirmed, and the tour promises to be a blockbuster. The 2015/16 Grand Prix Poker Tour will consist of 8 live venue events and 4 tournaments played on PartyPoker, with each of the legs having a modest buy-in of £60.00 + £10.00 and the first three at least having a guaranteed prize pool of £250,000.

The Dates and Venues for the GPPT

The Grand Prix Poker Tour kicks off at Dusk till Dawn on 17th/18th October and then visits some of the most iconic football stadiums in the country (with some online action thrown in between for a bit of variety).

A twist to the usual PartyPoker and Dusk till Dawn format of multiple online Day 1s is that, players who qualify through to Day 2 of an event via a “Players Choice” online Day 1, can choose which Day 2 they attend. For example, a player could make it through three online Day 1s prior to the Stamford Bridge event, but choose to play in Day 2s at Manchester, Leeds and Brighton

The leaderboard competition will reveal the most consistently successful players on the Grand Prix Poker Tour, with points only being awarded to players when they reach a Day 2. The points (or WPT Rewards as they are being called) will accumulate on a leaderboard over the next year, and the top thirty players will each win entry into a 2016 WPT UK Main Event worth £2,200. Players who finish outside of the top thirty spots, but within the top one hundred places on the leaderboard will each win a 2016 WPT500 UK seat worth £550.

You Have to be In It to Win It

Even if you live on the doorstep of the Dusk till Dawn Club in Nottingham, you will still benefit from having a PartyPoker account to take advantage of all the opportunities available throughout the Grand Prix Poker Tour. If you do not yet have a PartyPoker account, we can offer you an exclusive [geolink href=”https://www.pokernewsreport.com/party-poker-bonus-code”]PartyPoker bonus[/geolink] of 100% on first deposits up to $500.00 plus access to Dusk till Dawn online sub-satellites that start from as little as $0.01.

In order to take advantage of this exclusive offer, visit PartyPoker using the links on this page and create your account using the PartyPoker bonus code “[bonuscode room=”partypoker”]”. Qualifiers are already running for the first Grand Prix Poker Tour event – which is only five weeks away – so do not hesitate. Visit PartyPoker today and start your quest to be king of the leaderboard, win an overseas holiday and a Porsche.

Set your sites high for the Grand Prix Poker Tour?