Just four players will return for the final day of the $1,000 buy-in Seniors No-Limit Hold’em event #29 of the World Series of Poker (WSOP) in Las Vegas. 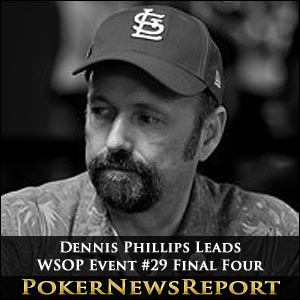 Just four players will return for the final day of the $1,000 buy-in Seniors No-Limit Hold’em event #29 of the World Series of Poker (WSOP) in Las Vegas.

As has happened with a few earlier tournaments, three days have proved insufficient, with the quartet of Illinois’ Dennis Phillips (first on 5,335,000 chips), Robert Phelps (second on 3,475,000), of California, Alabama’s Hoyt Corkins (third on 1,960,000) and Vegas-based Allyn Jaffrey Shulman (fourth on 1,620,000) returning to the Rio All-Suite Hotel & Casino’s Amazon Room for a fourth day today.

However, it shouldn’t have come as any great surprise that it will take a fourth day to decide the winner as this event attracted an incredible and record-breaking first-day entry field of 4,128.

Phillips might well hold a healthy chip advantage, but he had to battle hard to survive Day 3 – eventually picking up enough pots to move to the top of the leaderboard and in the perfect position to snap up his first gold bracelet.

Phelps, meanwhile, endeared himself to the gathered railbirds throughout the day, zooming up into second when eliminating Oregon’s Bill Stabler in fifth place for $147,605.

Third placed Corkins – who had spent much of Day 3 as one of the short stacks – chose his spots well, remained quiet throughout and will undoubtedly be ready for the challenge ahead, while Shulman – who eliminated Reno’s Stuart Spear is sixth place for $110,416 – appeared to double-up just when required to stay in contention.

Day 2 saw the money bubble burst within the first level of play as the 462 returning players were eventually whittled down to just 33. With 422 places paid, though, some big-name pros hit the rail early but with some money in their pockets.