The second Punta Cana Poker Classic (PCPC) main event has been won by another Canadian, Demo Kirlopoulos, in the Dominican Republic. 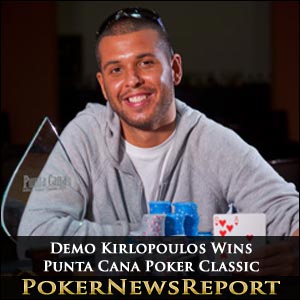 The second Punta Cana Poker Classic (PCPC) main event has been won by another Canadian, Demo Kirlopoulos, in the Dominican Republic.

The tournament title was secured by Peter Cross last year and he was there to see his fellow Canuck take this year’s crown and $136,950 top prize in the $1,500+$150 main event at the Hard Rock Hotel and Casino in the Caribbean nation.

Pro Kirlopoulos saw off 414 rivals, including players such as Evelyn Ng, Amanda Leatherman, Tatjana Pasalic, Humberto Brenes, Dave ‘The Devilfish’ Ulliott and McLean Karr, to take the tournament down.

Kirlopoulos appeared poised to lift the title when holding K-5 on a flop of K-5-2, only for Mauer, who held A-K, to land an ace on the river that put him right back in with a shot at glory.

However, Kirlopoulos’ strong play did finally pay off when, after five-and-a-half hours of their heads-up encounter, all the chips went into the middle with the board showing 10-K-10.

The Canadian revealed A-10 while Mauer held K-Q. The turn changed nothing while the Js on the river was a similarly dead card that allowed Kirlopoulos to emerge victorious and leave runner-up Mauer with a cheque for $82,792 as consolation.

American Mauer was, however, certainly not disappointed by his second-place finish, saying: “It was a great ride and having all the Bodog players behind me at the end gave me a huge amount of confidence – I just wish I could have gone all the way, but hats off to Demo Kirlopoulos, he played a fantastic game all week.”