The primary vendor selected by Delaware officials to lead the state’s online gambling scheme will play a huge role in the participation of the other applicants. 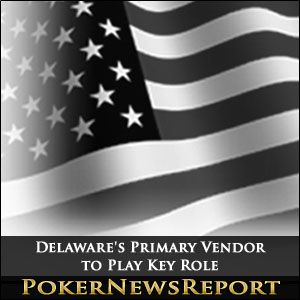 The primary vendor selected by Delaware officials to lead the state’s online gambling scheme will play a huge role in the participation of the other applicants.

A total of 14 companies answered the Delaware Lottery’s Request For Proposal by submitting applications prior to the March 14 deadline seeking to be included in offering services related to online gambling. Not all 14 are aiming for the primary vendor slot, with most just hoping to be allowed to perform a specialized function or niche. But whichever company manages to land the coveted primary vendor role is likely to have a large part in shaping the selection of the other applicants.

Three of the applicants stand out as those with the expertise and technology called for to secure the primary vendor title. The trio include International Game Technology, Amaya Gaming in collaboration with Bally Technologies, and the partnership of Scientific Games, 888 Holdings and WMS Gaming. The current odds-on favorite happens to be Scientific Games, who is already established in Delaware as the provider of the technology that operates the Delaware Lottery.

Delaware gaming officials will undoubtedly look favorably upon their current relationship with Scientific Games when analyzing applicants to determine the one best-suited for meeting the requirements needed to facilitate the primary vendor duties. Those duties are said to include recommending which additional vendors should be added to the mix. The other vendor applicants include Stan James, SHFL Entertainment, PokerStars, and several lesser-known companies, some of which are hoping to provide services related only to location and identity verification.

In regards to PokerStars, the top-rated poker site is hoping to get their foot in the door in the U.S. market in whatever state will allow them to participate. With Nevada’s bad actor clause preventing ‘Stars from joining the Silver State’s Internet poker scheme for five years and the American Gaming Association strongly opposing PokerStars’ entry into the the marketplace in New Jersey, parent company Rational Group is taking a shot in Delaware.

The chances of PokerStars being allowed to offer their poker product in the First State do not look all that promising. Delaware gaming officials will have to seriously weigh the pros and cons of permitting a company that continued operating in the U.S. following passage of the UIGEA in 2006 to participate.

Should Scientific Games be slotted as the primary vendor by the Delaware Lottery as many insiders suspect, the odds of PokerStars being approved would seem to lessen considerably. Remember, 888 Holdings and their 888 Poker brand have a partnership agreement with Scientific Games. It is highly probable that 888 would object to PokerStars being awarded a spot in Delaware’s online poker regime.