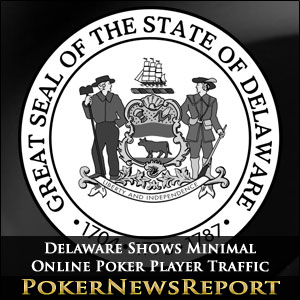 Granted, it’s only been a few days and things will likely get a bit better as time progresses. However, early indications are that Delaware officials may be seeking an interstate partnership with their counterparts in Nevada very soon.

As of this writing, sources report a peak of 36 cash game players. That’s hardly enough for a viable online poker scheme considering that players typically favor various stakes and game types at which to play.

It was known in advance that the player pool in Delaware would be limited considering the state’s tiny population of 900,00 or so. But it’s highly probable that Delaware Lottery officials were expecting quite a few more online poker players to find their way to the virtual felt.

The reasons for the low turnout may be many, but the first area that gaming regulators should look at is the likelihood that a number of players who want to log on are apparently being denied. Geolocation problems, similar to those that occurred in Nevada upon the launches of both Ultimate Poker and WSOP.com, have arisen.

Several Delaware residents have taken to the online poker forum at 2 + 2 to voice their concerns about being kept from playing due to their locations being improperly tracked. While situated within Delaware borders, these players report that Verizon is picking up their IP addresses as being in Pennsylvania.

Players will recall that Ultimate Poker experienced the same type of snafu and it took awhile before the matter was rectified. It may also take a number of days for the problem to be sorted out in Delaware.

While those issues with Verizon are being addressed, Delaware officials would be wise to make a cross-country call to Nevada and begin hammering out an interstate compact agreement. Player traffic in the Silver State now finds WSOP.com winning the battle of market share with 130 cash players in a seven-day average, while UP clocks in at 110.