Although Delaware’s full iGaming rollout won’t happen until November 8th, its play-money faithful will be invited to play for real money starting today. 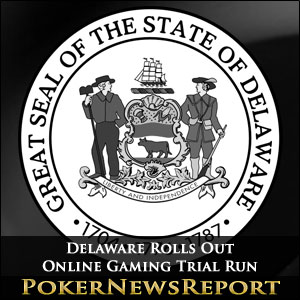 Although Delaware’s full iGaming rollout won’t happen until November 8th, its play-money faithful will be invited to play for real money starting today.

Later today, Delaware will enter the trial period of its online gambling rollout, marking the first time in United States history that casino style gambling will be regulated under state law. The trial is expected to last until next Friday, November 8th baring any unexpected software issues.

During an interview conducted on Tuesday, Delaware State Lottery Director Vernon Kirk stated that a selected group of preferred play-money players will be eligible to participate in a “soft launch” period. How the lucky players were chosen is not currently known.

The goal of the trial period is to ensure that key aspects of the software including transactions between players and casinos and game-play functionality are running smoothly. If all goes well, Delaware’s iGaming platform will be unveiled to its inhabitants without further delay.

Delaware’s foray into the online gambling market couldn’t have come at a better time. Revenues for its three casinos have fallen off drastically, partially because of the emerging gambling markets in neighboring states. The imminent launch of Internet gaming in New Jersey will likely also put a dent in Delaware’s prospective revenue margins for 2013 and beyond.

Ed Sutor, the CEO of Dover Downs is proposing that Delaware reduce its proposed tax to 15%, on par with New Jersey’s. Nevada’s online poker revenue tax is a relatively paltry 6.75%. Sutor will propose this recommendation and others before the Department of Finance prior to the full-launch.

888 Holdings, in conjunction with pre-paid scratch card tech company Scientific Games, are providing the platform for Delaware’s online software. 888 will also be offering its own branded poker site as part of its New Jersey deal with Caesars Entertainment.

Delaware was the first state to legalize online gambling and will be the first state to offer more than online poker. It was originally thought that because of Delaware’s small population, poker would not be included in the initial rollout, instead launching after an interstate compact was forged. However, Kirk confirmed on Monday that this was not the case.

Players who hope to log on to one of Delaware’s three casino web portals will be required to pass through several levels of verification first. Namely, their age and physical location must be verified before they are permitted to play, in accordance with state law.