Delaware Player Pools May Include Nevada and Europe

Delaware’s population is too small to successfully operate intrastate online poker, so gaming officials are considering compacts with Nevada and Europe. 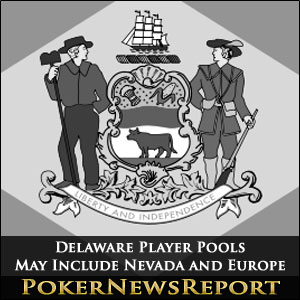 Delaware’s population is too small to successfully operate intrastate online poker, so gaming officials are considering compacts with Nevada and Europe.

With roughly 917,000 residents, Delaware has a population about three times less than that of Nevada’s 2.7 million. Industry observers believe that neither state can make it on its own in an online poker regime. Forming interstate agreements, and also adding an international flavor to the mix, should be more than enough to make the endeavor viable.

Vernon Kirk, the director of the Delaware Lottery Office, told USA Today that teaming with Nevada would likely be a good partnership and that discussions have also centered around Europe coming aboard. But the situation gets a little bit dicey when considering New Jersey in an interstate or international online poker scheme.

Delaware and New Jersey are not on the best of terms at the moment. As neighboring states, both have been in competition in attracting gamblers to their respective land-based casinos. One of the reasons New Jersey has been contemplating online gambling regulations is because its Atlantic City casinos have been losing customers to bordering states such as Pennsylvania and Delaware.

Nevada and Delaware are the only states that have approved online gambling legislation thus far, with the Silver State regulations restricted to online poker. But New Jersey may join the party soon, as lawmakers are expected to approve the proposals that Gov. Chris Christie put forth in his conditional veto of the online gambling bill on Feb. 7. The New Jersey State legislature is set to vote on the amendments on Feb. 26.

As to which state will be first to be up and running with online gambling sites, the odds-on favorite to have operational real-money online poker is Nevada. The Silver State may be ready as early as this spring. Delaware appears poised to be first in line to offer the full gamut of online gambling. The Delaware Lottery Office recently issued a request for proposals to vendors of online gaming sites and anticipates the sites to be live by Sept. 30.

Whether New Jersey can pass legislation in time to give Delaware a run for their money remains to be seen. It depends on how long Christie takes to sign the bill after it once again reaches his desk. Sen. Ray Lesniak, the bill’s sponsor, expects the Garden State to be up and running with Internet gambling sites this fall, which could compete with Delaware’s end of September timetable.

The race to be first is seen as crucial because the states who have online poker and gambling in place first will be able to set the conditions or terms of any interstate compacts.