The Delaware Lottery has chosen a joint bid by 888 Holdings, Scientific Games and Williams Interactive as the primary vendor in its online gambling regime. 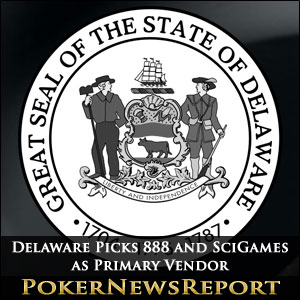 The Delaware Lottery has chosen a joint bid by 888 Holdings, Scientific Games and Williams Interactive as the primary vendor in its online gambling regime.

The consortium of gaming companies teamed up after Delaware issued a Request for Proposals in February that allowed interested parties a little more than a month to render bids. More than a dozen companies submitted applications, with PokerStars, Bally Technologies and Amaya Gaming among them.

The winning bid comes as no surprise considering that Scientific Games currently supplies Delaware’s lottery offerings. Many industry veterans viewed that relationship as practically an automatic “in.” A final contract among the trio attached to the winning bid must still be finalized. However, details include 888 supplying the venture’s poker platform, while Williams Interactive will likely provide casino content.

In soliciting bids, Delaware lottery officials advised applicants to keep a launch date of September 30 in mind. That allows five months to get gaming sites up and running in accordance with state regulations. But it’s believed that date is not set in stone and the consortium may set a goal of launching before the end of 2013.

Following the launch of legalized real-money online poker in Nevada last Tuesday, Delaware appears to be on track as the first state to offer a full menu of Internet casino games. New Jersey is also preparing to roll out its online casino offerings this year. The race is on, with Delaware seemingly holding a lead following the primary vendor selection.

The Delaware State Lottery will oversee all Internet gaming operations in the state and will apparently market the games via the state’s land-based casinos. Delaware has a small population of a little more than 900,000, ranking 45th among the nation’s 50 states. As such, an interstate agreement with other regulated states will likely be sought in order to make its online poker offering a successful endeavor.