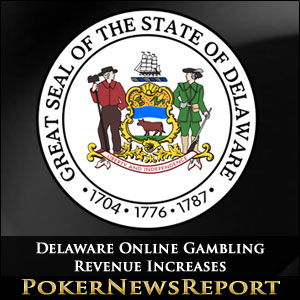 Online poker revenue for the month of April was listed by Delaware Lottery officials as $74,078.01. That figure is included in the $240,496.04 total, meaning that Internet poker revenue accounts for about 30% of the state’s overall igaming scheme.

Online poker revenue itself decreased in April, as rake in March totaled $84,391. With an online poker interstate partnership agreement with Nevada already signed and sealed, that total is expected to increase once the two states are able to launch hopefully later this year.

Due to its tiny population of less than 1 million, Delaware fails to attract the same attention in the igaming industry that is typically bestowed on New Jersey and Nevada. However, Delaware is the only state of the three that has steadily posted increases in online gambling revenue from month to month since launching in November.

Nevada took in $792,000 in online poker for April, which was almost 15% less than the previous month. The Silver State’s online gambling regime remains poker-only and state officials show no inclination to expand the scheme to include online casino games.

New Jersey also decreased from March to April, taking in $11.4 million after totaling $11.8 million in the previous month. Of that $11.4 million, $2.6 million came from online poker rake.

New Jersey has a population of about 9 million, good for 11th among the 50 states. Nevada and Delaware are much closer to the bottom of that list, as the latest census numbers show populations of about 2.7 million and 900,000, respectively.

Revenue numbers for the online gambling regimes of all three states have been a disappointment thus far when viewed as a whole. It may be part of the reason why no additional states have yet joined the trio in enacting Internet gambling legislation.

But that may change in coming months with rumors circulating that California is getting closer to approving intrastate online poker regulations. As the largest state in the country with 38 million residents, California could set the tone for the rest of the nation if the rumors turn out to be true.