History was made in Delaware earlier today as the state became the first in the nation to offer regulated online casino gambling in addition to poker. 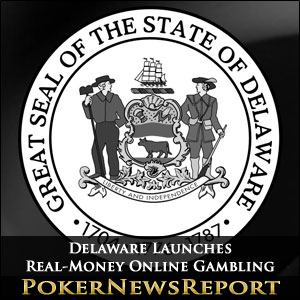 History was made in Delaware earlier today as the state became the first in the nation to offer regulated online casino gambling in addition to poker.

The state’s three racetrack casinos, or ‘racinos,’ have opened their virtual doors to anyone 21 years of age and older who happen to be within state borders. Dover Downs, Delaware Park and Harrington Raceway are online and accepting wagers at the poker tables as well as at the casino games of roulette, slots and blackjack.

Under the charge of the Delaware Lottery, the primary vendor collaboration of Scientific Games, its subsidiary WMS Interactive, and 888 Holdings, is powering the Internet casino and poker platforms. The state’s goal is to attract the younger, more computer-savvy crowd to online gambling, while hoping that older gamblers who are not as computer-proficient will continue visiting the land-based racinos.

Delaware has a tiny population of roughly 900,000 that ranks 45th in the U.S. State officials have estimated revenue for online gambling in the first fiscal year to be somewhere in the neighborhood of $5 million. That pales in comparison to estimates in New Jersey, with revenue numbers in the hundreds of millions being anticipated in the Garden State.

New Jersey’s invite-only soft launch is set for November 21, with the real-money full launch scheduled to kick off five days later. But for today, all eyes remain on Delaware, as the first state to ratify the Constitution of the United States back in 1787 has also become the first to offer real-money online casino gambling.

Considering Delaware’s small base of available players, interstate compacts will likely be forged in short order to increase the online poker player pool. Nevada officials have already expressed a strong desire to work out an agreement with Delaware and indications are that New Jersey may also come aboard.

Nevada, of course, was the first to offer regulated online poker to its residents and tourists. The Silver State also has a small population to work with, only 2.7 million. New Jersey dwarfs the numbers of both Delaware and Nevada with more than 9 million folks calling the state their home.