In preparation of a real-money online gambling launch that has been pushed back to October, Delaware’s trio of casinos have rolled out free-play gambling sites. 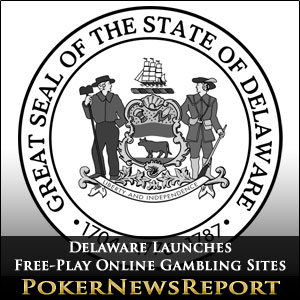 In preparation of a real-money online gambling launch that has been pushed back to October, Delaware’s trio of casinos have rolled out free-play gambling sites.

The online home pages of Dover Downs, Delaware Park, and the Harrington Raceway and Casino all direct visitors to Internet free-play casino games at DoubleDown Casino via Facebook. Poker, blackjack, roulette, slots and other games are available to players at least 21 years of age.

The free-play offerings are designed to acclimate Delaware players to online gambling. However, the marketing strategy includes enticements aimed at prompting gamblers to visit the brick and mortar gaming establishments.

Players the world over can log onto the free-play sites. But when real-money Internet gambling makes its debut in two months, the games will be restricted to Delaware residents.

Delaware gaming officials had previously pegged late September as the time when online gambling would be launched in The First State. That aggressive projection will not be met and late October is now a much more realistic likelihood, Delaware Secretary of Finance Tom Cook told delawareonline.com.

While Nevada has already rolled out online poker, Delaware continues to lead New Jersey in being the first state to offer a full slate of online casino gambling. New Jersey gaming regulators have fixed November 26 as the Garden State’s Internet gambling launch date. If Delaware is able to meet the late October projection, they will beat New Jersey to the punch by four weeks or so.

Interstate Compact with Nevada in the Works

Cook also stated that by early 2014, Delaware hopes to team up with Nevada to form an interstate compact. The pooling of players is a likely necessity, as both states are on the lower end of the spectrum in the U.S. in terms of population.

Along with interstate agreements, 2014 will also see Delaware players on the go have the ability to gamble for real money. Mobile online gaming is anticipated to grow substantially in the future and Delaware officials will not miss the boat in that regard.