Nevada and Delaware have had discussions regarding an interstate compact agreement that would enhance online poker liquidity by combining player pools. 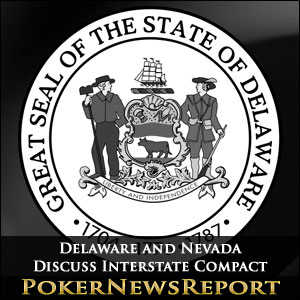 Nevada and Delaware have had discussions regarding an interstate compact agreement that would enhance online poker liquidity by combining player pools.

Delaware State Lottery Director Vernon Kirk confirmed that the two states have broached the topic of banding together since both rank relatively low in terms of population. Latest counts put Nevada at about 2.7 million residents, while Delaware is roughly 100,000 shy of 1 million.

One of those concerns is declining revenue at Delaware’s land-based casino operations resulting from competiton from the neighboring state of Maryland. The Maryland Live! casino reported a revenue increase of 80.5% for June in comparison to the same month last year. It is believed that Maryland Live! is siphoning much of the casino traffic previously enjoyed in Delaware.

One long-term solution expected to buoy Delaware’s revenue shortfall is the First State’s online gambling regime, which gaming officals hope to have up and running in late September. The primary vendor consortium of Scientific Games, Williams Interactive and 888 Holdings has already been named and the state is fine-tuning its online gambling regulations. Delaware’s proposed regulations have been released with comments from the public being accepted until the end of July.

Nevada, meanwhile, has been operating its poker-only online scheme since late April when Ultimate Poker launched ahead of its competition. But online poker offerings in the Silver State are expected to be plentiful, (perhaps too much so), when the likes of Caesars Interactive, Treasure Island and South Point Poker roll out their products.

Thus, a collaboration with Delaware seems a good fit for both states. The other state with online poker and gambling legislation in place, New Jersey, has apparently not yet entered into discussions about compact agreements. New Jersey boasts almost 9 million residents and would be a welcome addition to an interstate online poker scheme.