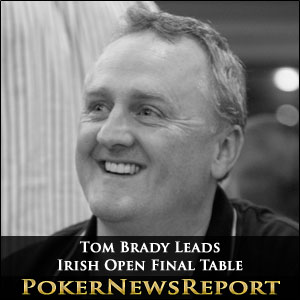 The Paddy Power Irish Open is Europe´s longest running NL Hold´em poker championship and one of Dublin´s most eagerly anticipated live poker events of the year. Played over the Easter weekend, this year´s Main Event attracted 505 players for the €2,000 buy-in – creating a prize pool in excess of €1 million.

Previous winners Kevin Vandersmissen, Marty Smyth, Neil Channing and Noel Furlong all attended the event once more; hoping to become the first player since Liam Flood (1990 & 1996) to achieve a dual success in the Main Event (Liam Flood and Noel Furlong are trying to win it for a third time), and they were joined by players such as Roberto Romanello, Andy Black, Dara O’Kearney and Kevin MacPhee.

As with his victory at the IPO, Brady once again takes a significant chip advantage into the climax of the event. Resuming Day 3 sixth in chips (449,500) behind overnight leader Calvin Anderson (890,500), Brady moved quickly up the leaderboard with the elimination of Kevin MacPhee A♠ 10♣ > A♥ Q♣ after both players had paired their lower cards on the flop of Q♠ 10♠ 5♠ and made two pairs when the A♦ was dealt on the turn. A spade on the river gave Brady the Flush and bust MacPhee out of the tournament.

Tom Brady confirmed his position at the top of the final table chip counts when eliminating Francis McDonald in tenth position (pocket Tens holding against McDonald´s A10o) but, on the final table of eight players, he will be up against three players with their sights set on more than just the €265,000 first prize.

Calvin Anderson, Adam Fallon and Declan Connolly all have a chance of picking up an additional €60,000 bonus for being the “Sole Survivor” – the last player who qualified online at Paddy Power Poker to remain in the Irish Open Main Event – as well as a seat in the WSOP Main Event and an invitation to next year´s Irish Open.

Also on the final table is last year´s fourth place finisher (and 2012 “Sole Survivor”) Ian Simpson and Iraqi poker player, Namir Mohammed, who has been a regular at the Irish Open for more than a decade – this being his third, and biggest, cash in the event. The final table is completed by Mark Davis and Michael Farrelly.