Another new poker tour has been added to the ever-growing calendar of live poker events across the globe, the DeepStacks Poker Tour. 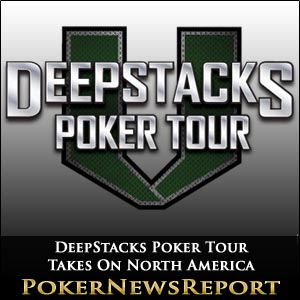 Another new poker tour has been added to the ever-growing calendar of poker events across the globe, the DeepStacks Poker Tour.

Following on from the announcement of the 2012 Deep Stack Extravaganza series of 44 tournaments in Las Vegas’ world-famous Venetian Resort Hotel Casino for next year – which kicks off on January 26 – website DeepStacks have boosted the soon-to-be crowded schedule by introducing the DeepStacks Poker Tour.

The tour – which will be televised as it make numerous stops across North America – will be packed with DeepStacks pros, such as triple World Series of Poker (WSOP) bracelet winner Mike ‘The Mouth’ Matusow, World Poker Tour (WPT) champion Michael ‘The Grinder’ Mizrachi, his older brother Robert, who is a one-time WSOP champ, and high stakes specialist and WPT champ Justin ‘Boosted J’ Smith.

DeepStacks chief executive officer Chris Torina is thrilled by the prospect of tournament novices facing up to the best the game has to offer.

He said: “DeepStacks has established itself as a leading brand in the poker industry. Now we’re giving players a chance to play against some of the best pros in the world on TV, without having to go broke.”

“The DeepStacks Poker Tour is tournament poker how it should be – great value, top pros and exciting television programming.”

The tour’s organisers promise enjoyable event structures, as well as impressive guaranteed prize pools, for the many stops across North America – starting in February at the Seneca Niagara Casino in Niagara Falls, New York State.

The $1,500 buy-in DeepStacks Poker Tour Western New York Poker Championships, which will be staged from the 15th until the 19th, will guarantee a minimum prize pool of $200,000.

The event will also, of course, be televised, with host Joe Stapleton – a video blogger and award-winning commentator – being joined by analyst and Team DeepStacks Pro Wade.

The inaugural DeepStacks Poker Tour season will also make visits to Quebec, Oregon, Nevada and California, although very few details of these upcoming events are available. We here at Poker News report will most certainly keep you updated on any poker news released by DeepStacks.

If you are looking for any additional information on the DeepStacks Poker Tour, get yourself on over to deepstackspokertour.com.