The World Poker Tour has announced a selection of dates for the first half of its Season XIII schedule – with no mention of the recently hyped Deepstacks Tour. 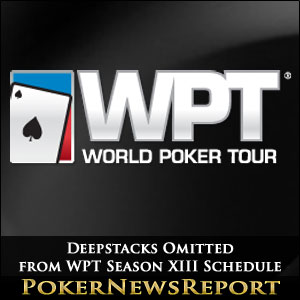 The World Poker Tour has announced a selection of dates for the first half of its Season XIII schedule – with no mention of the recently hyped Deepstacks Tour.

Just five short weeks ago, World Poker Tour President Adam Pilska was quoted as saying he could not be more excited about the partnership between the existing Deepstacks Poker Tour and the WPT, which would rebrand all their Regional and National Events as “WPT Deepstacks”.

Now it would appear that Mr Pilska´s excitement has worn off, as the new World Poker Tour schedule for the first half of Season XIII has re-rebranded the WPT Deepstacks event scheduled for Aspers Casino in London in July as the “WPT Party Poker UK National” and removed the event in Malta scheduled for November.

Main Tour Much the Same as Last Year

The schedule for the “Main” World Poker Tour is pretty much the same as last year. The Legends of Poker, Borgata Open, Poker Scramble, Emperors Palace Classic, WPT Montreal and Five Diamond Classic are all scheduled for much the same dates as they were last year.

The WPT Merit Classic in Cyprus has been put back a month to account for it being hot in the Mediterranean in August, and the WPT UK @ Dusk Till Dawn replaces the disappointingly attended WPT Caribbean won by Tony Dunst in Season XII. There is also a slight change to the new WPT500 Aria event – which now kicks off on Friday 4th July, rather than the previously advertised 1st July.

Not the WPTDeepstacks Tour

The schedule for the WPT Regional and National events is heavily focused on European destinations throughout the rest of 2014, with only one event scheduled for the States. The WPT´s “carefully chosen partners” tend to have a familiar ring to them, but no doubt they will be as popular as ever and well supported by a range of online qualifiers.

More Dates to be Announced Soon

The World Poker Tour´s website states that more “branded” Regional and National events will be announced soon. We wonder what they will be branded as next time?